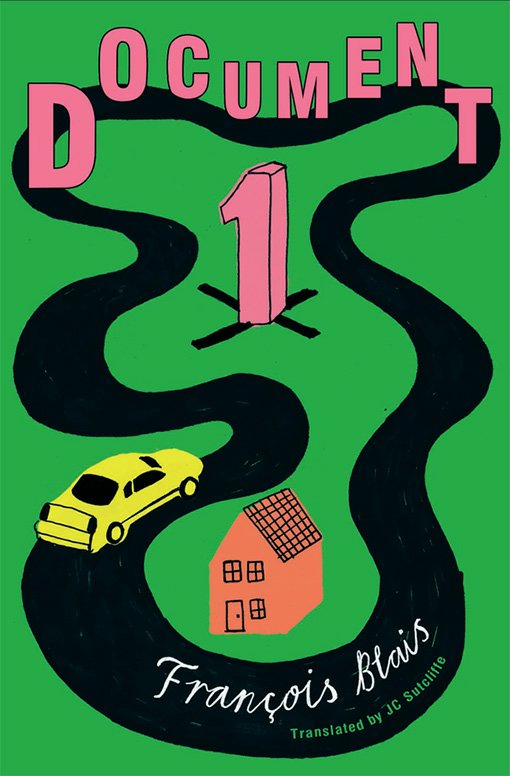 In the years since I started reading and reviewing more books in translation, one of the nice things has been the chance to talk to translators on social media. This has given me a greater appreciation of the work that goes into translation, and made me more attentive to the language of fiction in general.

One of the translators I’m in touch with on social media is JC Sutcliffe, who translates from French. Recently, she asked me if I would be interested in reviewing a couple of books she had translated, which were published by Book*hug in Canada. I’m not that familiar with fiction from Quebec, and I liked the sound of both novels, so I said yes.

The title I’m looking at today is Document 1 by François Blais; he’s written nine novels, but this is his first to appear in English. At the start, we’re introduced to a pair of amiable slackers: Tess and her partner Jude (those names are referencing Thomas Hardy, but as I’ve not read him I can’t explore that). From their home in Grand-Mère, the couple travel the world – via Google Earth and a flick of the mouse, that is:

We jump the four hundred kilometres separating Minnesota’s metropolis from Des Moines, Iowa. We’d better see what the buzz is down here. Fly low over Grand View University. Not much going on, it’s all very peaceful, but let’s just note in passing that the Des Moines fire hydrants are yellow. Another crucial piece of information to take up storage space in our brains. There’s not much happening on Euclid Avenue either, even though it seems to be one of the town’s major commercial streets. Lots of vehicles (trucks in particular), but no pedestrians: apparently strolling is not the done thing in Des Moines…

One day, against their usual instincts, the couple decide to go on a road trip, to Bird-in-Hand, Pennsylvania (they like places with unusual names, and it’s not too far to travel). The problem is, they don’t have a car, or indeed enough money to fund the journey. Eventually, they hit on an idea: to apply for a government arts grant that would fund a book of the road trip. Tess and Jude find a local writer, Sébastien Daoust, to lend his name to the grant application; the resulting text is the novel we’re reading (though it’s Tess who has ‘written’ it, with a very little help from Jude).

In case you’re wondering, the title of Document 1 comes from the default name of the Word file that Tess creates for the text. She says at one point:

Dear reader, as you have in your hands the finished product, with a beautiful cover, a beautiful ISBN number, and gushing thanks to the Arts Council, you must already know the title we chose. Admit it, it’s a pretty impressive title! I have no idea what it will be, but I know we’ll find something spectacular. I have faith in us.

And you can see how well that went…

I don’t always care for this kind of metafictional humour, but Blais gets it spot on for me. Tess has picked up a couple of ‘rules of writing’ books and keeps pointing out for our benefit the techniques she’s used in her text – techniques not necessarily used with much care or sensitivity (a random flashback resolved several chapters later, for example). Blais has managed to balance it so that he writes with a tin ear in places, yet this still works well in context, without coming across as making fun of his narrator – and Sutcliffe captures all that in her translation. When I write it out like that, it sounds onerous; but it reads so lightly.

Stu has also reviewed Document 1 over at Winstonsdad’s Blog, and he too is impressed with the novel’s dry wit. I hope we will see more of Blais’ work in translation, because this is a fine introduction.