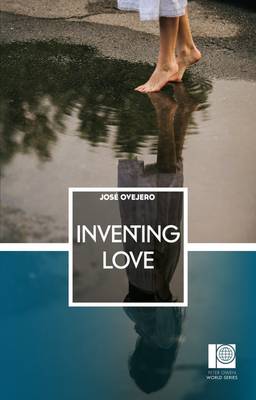 The book I’m talking about today is part of Peter Owen Publishers’ ‘World Series’, which is published in association with Istros Books. Twice a year, they publ ish a set of three titles from the same country or region; Spain is the country of choice this spring. The publishers have kindly sent me a set of the books, so I’ll be looking at all three in the next few weeks.

Inventing Love is the second of José Ovejero’s novels to be translated into English. Our narrator is Samuel, a single man drifting through life at forty. He’s someone who has trouble with the idea of love:

I’ve always avoided the word ‘love’. It’s a noun that’s been devalued, a coin so overused that it’s been rubbed smooth, so that you could hold it between your fingers without feeling the relief design, a coin that I wouldn’t dare use to pay for something in case I was accused of being a fraudster…Does anyone really use it? Do couples really gaze into each other’s eyes and say ‘I love you’?

One night, Samuel receives a phone call telling him that his lover, Clara, has been killed in a car crash. The thing is, Samuel has never known anyone called Clara. Seizing the chance to add a little colour to his life – and curious as to who this Clara might have been – he goes along to the funeral.

None of Clara’s family or friends knows what ‘her’ Samuel looks like, so it’s easy enough for ‘our’ Samuel to step into the role. After the funeral, he is approached by a woman who turns out to be Clara’s sister, Carina. She’s heard a lot about Samuel, and is curious about this man who led her sister to have an affair. Carina gives Samuel her card; over time, they get talking – about Clara most of all.

At first, it’s Samuel who gets to learn about Clara, allowing him to build his mental picture of this young woman he never knew. But Carina wants to understand the side of her sister that only Clara’s lover would have known… so Samuel has an opportunity to imagine part of Clara’s character for himself, and indeed to shape the image of Clara in the minds of those who did know her.

I don’t think the events of Inventing Love are meant to be taken literally – there are too many fortuitous coincidences for that. Instead, I think of Ovejero’s novel as a space to explore what it means to have a mental picture of someone else, by stretching the concept to such an extreme.

One issue emerging from the book is how well we can actually know others. Samuel is clear on his view:

We share our lives with strangers. We can live with someone for decades and not know how she really feels when she says ‘I love you’ or replies to a question with the words ‘I’m not angry.’…We live with fantasies we create for ourselves in order to explain to the other person and to create a relationship that reassures us and gives us what we want.

He’s right in a strict sense, in that we are all individuals without direct access to each other’s minds. But then again, it’s not as if Samuel has made much of an effort in the long-term relationships department, so how sure can he be that it’s impossible to know another person?

Rather ironically, there is someone else whom Samuel thinks he knows, and that’s Clara. After some digging around online, he manages to find her Facebook profile, but he doesn’t want to go any further: “I don’t want to enter the false intimacy of her wall because I already know who Clara is, and I don’t want reality to spoil her.”

So there you go: Samuel can gather and imagine all the detail about Clara that he may; his image of, and feelings towards, her could be larger-than-life – but the Clara in his mind will never be ‘real’. Taking a cue from the novel’s title, perhaps the key question facing Samuel is whether love is something he can invent for himself, or whether it has to be found.

Read an excerpt from Inventing Love at European Literature Network.

At the time of writing, I can’t find many English-language reviews of the book online. Michael Orthofer has written it up at The Complete Review; he also links to Larry Nolen’s review of the Spanish original at the OF Blog, as well as a number of reviews in Spanish.