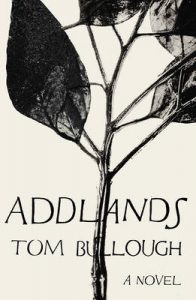 Tom Bullough grew up on a farm in Radnorshire on the Welsh borders. As an administrative county, Radnorshire is no more, having been officially absorbed into Powys in 1974; but Bullough notes on his website that there’s still a Radnorshire which persists in people’s conception of the area. Addlands, Bullough’s fourth novel, is set in Radnorshire; and that sense of a distinct place, a specific landscape, runs deep throughout.

The novel begins in 1941, on the day when Etty Hamer gives birth to a son, Oliver. Idris, Etty’s older husband, is out ploughing the fields; the farm is his life – even the midwife’s news of a bomb being dropped nearby doesn’t shake Idris from his work:

‘Oh,’ Idris repeated, as if this woman were a stranger, as if they had not sat within ten yards of one another every Sunday for the past twenty years. He turned his eyes another inch into the darkness and held up the lamp to light the old wooden bridge that led across the flem to the house. ‘I had best fodder the beasts, I had. Please to go on in, Mrs Prosser.’

Subsequent chapters return to the Hamers and their farm every few years, all the way through to 2011. Oliver grows up, to become a figure of some renown in the local community. There are changes in the family and other relationships; the farm and wider area face shifting fortunes; new technologies and social developments leave their mark. Through it all, Addlands maintains a distinctive relationship between reader, character, and setting.

One thing that stands out early on is Bullough’s use of dialect. Here, for example, is a conversation between the young Oliver and a friend in 1952:

Oliver grunted, took the spare pair of gloves and pulled one over his bandaged hand.

‘You looks like your puppy just grew up a fox!’

‘I hearkened her, to be honest with you. Kept back again, is it?’

‘Griffin,’ Albert snorted. ‘Still having a go, then, is he?’

Even in context, it takes a little time to decode this exchange about getting in trouble. But I don’t find this dialect to be like – say – the nicknames in Morvern Callar, keeping the reader out of a secret world. It’s more a feature of the landscape, something to which you do have to adjust, but which will become familiar in time.

Above all, though, what strikes me about Addlands is how the progression of the novel is oriented around the place rather than the characters. If you’ll forgive a generalisation: typically, in a generational saga like this, we (for which read: I) might expect the family’s experiences to be the linking thread, and for the book to deal with changes in the wider world in the context of how they affect the family. We still get that in Addlands, but there’s a subtle difference in emphasis: some key events in the ‘human’ story of the Hamers are missing, and everything is related back to the farm above all. So this becomes a story of the family as a part of their landscape.

There’s a scene set in 1957 where Idris is reading over the detailed records he has kept of the local farms’ sheep flocks. “This was the knowledge that allowed you to survive,” comments Bullough’s narrator, “not the doddle you were told in a classroom. Had [Idris] wished, he could have traced the blood-line of almost any sheep within fifteen miles, as like as not through forty generations.”

Contrast this with a moment from 1996, when Oliver is visited by a young woman who admires the poetry written by Oliver’s ex: “You’re surely aware that you appear in her work?” says the visitor. “I mean her Drought collection. That more or less started me writing myself…It’s one of the formative books in post-pastoral poetry.” Oliver’s reply is tart: “Post-pastoral? We in’t done yet, girl.”

Four decades earlier, the farming life was ingrained in this land, powered by knowledge and instinct which had built up over years. Now, it has become something that can viewed from a distance, in the abstract. But, as Oliver notes, the farms are still there: life still goes on, despite everything. According to the novel’s epigraph, by W.H. Howse, the word ‘addlands’ refers to “the border of plough land which is ploughed last of all”. That’s the land of the Hamers: the land that remains to the end.

« The Transmigration of Bodies: ii – networks and conversations Traces of Sandalwood by Asha Miró & Anna Soler-Pont »