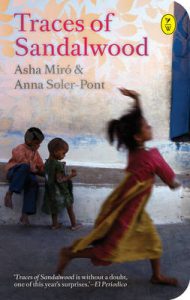 After Monday’s detour to Wales, it’s back to Spanish Lit Month with a story of displacement and searching, by Asha Miró (who was herself born in India and adopted by a Spanish couple at the age of seven) and. We meet three children whose worlds are upended in the 1970s: in Addis Ababa, Solomon’s father is a cook in the emperor’s palace, until the emperor is deposed by the military; several years later, Solomon is one of a number of Ethopian children awarded scholarships to Cuba. In India, an orphan named Muna is sent from her home village of Kolpewadi to work in a Bombay carpet factory; eventually she ends up working for a family, which is where she learns to read and write. There is also Muna’s sister, Sita, who was sent to an orphanage in Bombay at age three, and has no memory of the older girl; Sita wishes for parents of her own, and soon finds herself on a plane, heading for her new life in Barcelona.

Something that really comes across in Traces of Sandalwood is the sense of dislocation and upheaval that each of the three protagonists experiences. For example, Solomon’s voyage to Cuba:

The first days seemed very long. On deck, the boys and girls sat on the floor and cried inconsolably. Many of them hadn’t shed a tear since they had said goodbye to their families to go to Tatek, but now the sensation of being on that imposing ship with its smoking chimney, a kind of floating building that was moving away from solid ground toward a totally unknown world, finally overcame them. Now there was no-one shouting at them and telling them that men don’t cry. It seemed as if, suddenly, all of the adults had disappeared and left them alone, adrift in the middle of the water.

But perhaps the most striking thing about this novel is its structure: after we leave the children behind, the narrative jumps forward 25 years, and we have to acquaint ourselves with the characters all over again. Muna, for example, is now an international movie star, and keen to track down her sister after all this time. As adults, the three protagonists’ lives come together as they could never have imagined.

By leaving that gap between past and present, Miró and Soler-Pont make the experience of reading Traces of Sandalwood reflect their characters’ lives: the disorientation of being in an unfamiliar place or situation; a heightened sense of life as a series of distinct (albeit linked) episodes. We see the children’s lives cast up into the air when we meet them; by the time we leave them as adults, we have a sense that maybe they have landed well.