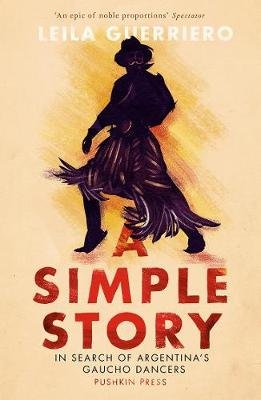 After a look back, it’s time for my first ‘new’ post for this year’s Spanish and Portuguese Literature Month. Leila Guerriero’s A Simple Story is a piece of journalism from Argentina. Every year in the town of Laborde, young working-class men compete to be crowned champion of the malambo, a physically-demanding traditional dance. Custom dictates that the winner must never perform the malambo again – but the prestige he’ll gain is unparalleled.

Guerriero says in the book that she set out to write about the malambo competition in general, but that changed when she saw Rodolfo González Alcántara dance:

He became the countryside, the dry earth, the taut pampas horizon, he was the smell of horses, the sound of the sky in summer, and the hum of solitude – fury, illness, and war. He became the opposite of peace. He was the slashing knife, the cannibal, and a decree. At the end he stamped his foot with terrific force and stood, covered in stars, resplendent, staring through the peeling layers of night air. And, with a sidelong smile – like that of a prince, a vagabond, or a demon – he touched the brim of his hat, And was gone.
(translation by Thomas Bunstead)

A Simple Story then follows Rodolfo as he trains for the 2012 Laborde festival. Though the two books are quite different, I was reminded of Katie Kitamura’s The Longshot, which captures a similar sense of physicality and all-consuming determination.

If you’d like to see Rodolfo dancing the malambo, here’s a clip.