Notes to Self – Emilie Pine 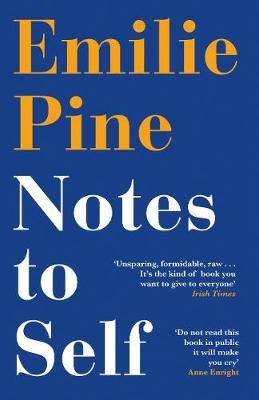 Emilie Pine is an academic at University College Dublin. Notes to Self is a collection of personal essays, first published in Ireland by Tramp Press, and now given a UK edition by Penguin. The book begins with Pine and her sister visiting their seriously ill father in a Greek hospital:

By the time we find him, he has been lying in a small pool of his own shit for several hours.

This is typically unflinching of Pine as she delves into her life across the six essays. In the first piece, ‘Notes on Intemperance’, she details that immediate situation, where she and her sister have to clean up and look after their father because the hospital is so understaffed, but also her complicated relationship with her father’s illness. He was an alcoholic, which caused liver failure and the haemmorage that has put him in hospital, but also left him cold and antagonistic as a father. For Pine, this made him difficult to love:

I used to push myself to reject him, to walk away, failing each time. I oscillated between caring for the man who was afflicted with this terrible disease, and attempting to protect myself from the emotional fallout of having an alcoholic father. It took years of refusing him empathy before I realised that the only person I was hurting was myself.

Pine captures these ambivalent feelings on the page, but she also confronts what it means for herself and her family to write about life in this way. Yet ultimately there’s a sense that this act of writing is vital: “what my dad really taught me, despite himself perhaps, is that writing is a way of making sense of the world, a way of processing – of possessing – thought and emotion, a way of making something worthwhile out of pain.”

Through writing, Pine then takes possession of deeply personal experiences: infertility, her parents’ separation, sexual violence. Sometimes the subject of an essay is intertwined with writing itself. For example, Pine begins ‘Notes on Bleeding & Other Crimes’ with the metaphor of a writer bleeding on to the page, before going to consider periods and societal taboos around her body. At the end of this essay, she wonders what her body might say if it could tell its story:

Notes to Self is a raw and powerful reading experience. It’s often harrowing, but there are also compelling moments of hope and optimism. The passage I’ve just quoted reads like that to me: hope through writing, the stuff of life taken apart and rebuilt to find a way forward.