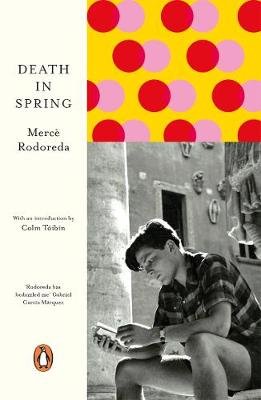 Mercè Rodoreda (1908-83) was a new name to me, but more or less everything I’ve read about her says that she’s widely considered to be the foremost Catalan writer of the 20th century. Death in Spring was originally published posthumously, in 1986. Martha Tennent’s English translation was published in the US by Open Letter Books, and now it has been issued by Penguin in the UK as first in a series called Penguin European Writers.

Our narrator is a boy living in a mountain village with a number of strange, sometimes brutal customs: every year, a man is chosen to swim under the village in order to check that it will not be washed away by melting snow; this may result in disfigurement or death if the man is dashed against the rocks. Pregnant women are blindfolded from fear that their unborn children will take on the appearance of any men the women may see. When a villager nears death, they are sealed inside a tree with cement poured down their throat; this happens to the narrator’s father towards the start of the book.

Images of death, decay and decline run through Rodoreda’s novel, along with a vivid sense of the natural world, all written in calm and measured prose. Here, for example, is a description of autumn arriving in the village:

The sickly stems that had held the leaves all summer were now devoid of water, and they thudded to the ground as well. The leaves were blown down and swept away. We waited for the last to drop so we could rake them into piles and set fire to them. The fire made them scream. They screamed in a low voice, whistled even lower, and rose in columns of blue smoke. The smell of burnt leaves pervaded houses and air. The air was filled with the cessation of being.

The cover blurb notes that Death in Spring can be read as an “allegory for life under dictatorship”, and I can absolutely see that: those ritualistic customs, for example, have a damaging hold over the village, and the only person who seems to understand this (or simply to be willing to speak against them) is a prisoner. Equally, though, the novel is a powerful portrait of an individual trying to find his way through life in a place where there’s excessive direction and little guidance.