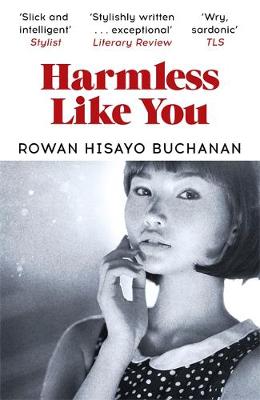 Earlier this week, the Desmond Elliott Prize for first novels was announced. The winning book was Francis Spufford’s Golden Hill, which I’m reading at the moment. The novel I’m looking at today, however, was one of the shortlisted titles. Rowan Hisayo Buchanan has written a tale of navigating life at the confluence of two cultures – and it’s a strong debut.

In 1968, Yuki is the daughter of a Japanese family living in New York. Her father’s company is sending him back to Tokyo, but Yuki is torn over the prospect of going there: on the one hand, she doesn’t have a single friend in New York; on the other, Japan is a distant memory for her.

Skipping class at school, Yuki meets a girl who calls herself Odile, and who dreams of being a model. Odile becomes the closest thing that Yuki has to a friend, and Yuki decides to move in her and her mother Lillian, a romance novelist. Yuki wants to be more like Odile – which is to say, she’d like to be whiter; Yuki is never quite able to resolve the tension she feels of being between two cultures. The two experience teenage girlhood in New York – but when Odile gets her dream, they start to drift apart, and Yuki has to look elsewhere for a connection.

Buchanan is excellent at delineating the development of Yuki’s different relationships, how each grows alongside the last to begin with, before gradually superseding it as circumstances change. The author also evokes Yuki’s feelings about art brilliantly. Yuki’s great desire is to be an artist; her feeling for art is visceral. Here she is experiencing an exhibition of contemporary art for the first time:

Warm tears raced down her cheeks and into her mouth. She swallowed them, imagined the salt absorbed by her gut and revolving up again towards her eyes. The clear white gallery lights pointed and blurred like stars. It was as if someone had peeled off the crisp outer layer of her skin so that the whole world felt achy and glowing. Finally, this sadness was no longer trapped in her cramped body. It was a living thing and bright as joy itself.

This is a raw, deep emotion that seems to emerge spontaneously. An outside observer may not understand, may think: why is she being driven to tears by a pile of dirt? The sense is that this feeling of Yuki’s doesn’t fit into the world; her wish as an artist is to create a space in the world where it will fit – just as she is looking for a space for herself.

Alternating with Yuki’s story is that of her son Jay, almost fifty years later. Half-Japanese, half-wit, Jay was abandoned by his mother when he was a young child. Jay’s main story begins as he becomes a father; a few months later, he loses his own father, who died after swerving off the road to avoid a deer; dealing with his father’s estate will finally lead Jay to confront Yuki.

Jay’s situation is not quite an inversion of his mother’s, but the landscape of his life is different. As a gallery owner, the art world is no mystery to him. He’s puzzled by parenting, though; and still ponders his place in the world. Perhaps we might say that Jay had at least part of a path through life illuminated for him in a way that Yuki didn’t; but he still has to find his own way through in the end. Harmless Like You is the story of how both Yuki and Jay come to a conclusion in life, by finding each other.