Back to the beginning: a few thoughts on Virginia Woolf’s The Voyage Out 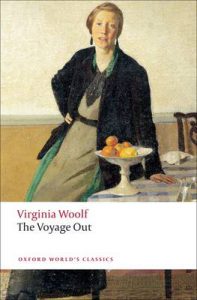 I haven’t had a lot of time lately for blogging (or, at times, reading), so I’ve had to scale back some of the plans that I had. But I do want to sketch out a few notes on my second #Woolfalong book. The theme for phase two (which covers March and April, so I’m still in time… just!) is ‘beginnings and endings’ – Woolf’s first or last book. After reading Mrs Dalloway, I decided that I wanted to go back to the beginning and Woolf’s 1915 debut, The Voyage Out.

It’s interesting to compare the two. Stylistically, The Voyage Out is much more conventional; but I still notice seeds of what I found in the later novel. For example, there’s something of Mrs Dalloway’s shifting web of consciousness: The Voyage Out is ostensibly the story of Rachel Vinrace, a young woman on the journey to South America that will be her rite of passage. But the novel is larger than her viewpoint: it starts and ends with other characters, and there are familiarly abrupt transitions between perspectives.

Clarissa Dalloway herself even makes an appearance towards the beginning of The Voyage Out. But it was particularly interesting for me to contemplate a parallel – suggested by Lorna Sage in her introduction to the edition I was reading – between the characters of Rachel Vinrace and Mrs Dalloway’s Septimus Smith. Thinking about the endings of each book, I guess those two characters could be seen as interruptions into a safe and ordered (one might say complacent) world. I suspect this won’t be the last time I find that happening, as I read more of Woolf’s work.

The Voyage Out (1915) by VIrginia Woolf, Oxford World’s Classics paperback