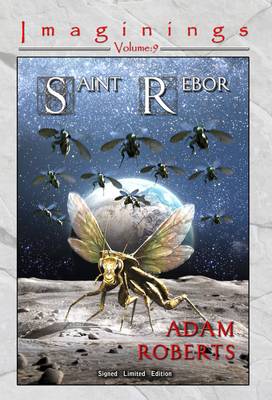 Strange Horizons have my review of Saint Rebor, the latest short story collection from Adam Roberts (published as part of Newcon Press’s Imaginings series). I wanted to say a few words on my approach to this review, because it grew out of a sense of dissatisfaction with the other reviews that were out there.

Saint Rebor itself hadn’t garnered much commentary at the time I was putting together my review, but the book’s opening story, ‘What Did Tessimond Tell You?’, had several reviews following its appearance in a year’s-best anthology . The story is about a scientist who discovers why the members of her project team are quitting even though they’re on the verge of winning the Nobel. Generally, the reviews I read revolved around the plausibility of the science, and didn’t go much further than that.

This approach wouldn’t do for me because I had a very different sense of what was interesting about the story. To me, the issue of scientific plausibility was simply not important in terms of what Roberts was actually doing – in my experience of his fiction, it rarely is. I wanted to write a review that offered a different way of looking at the stories in Saint Rebor.

I was a little daunted by the prospect: Roberts’s style can be dense and allusive, and I know that his references are often beyond my own sphere of experience. I may well not have been the best person to engage with what I saw in Roberts’s stories – but it looked as though if I didn’t, no one else would, and I felt strongly that it needed to be done. (This, incidentally, is one of the impulses behind book blogging: that you feel something has to be said about a book, and nobody else is saying it.)

So I have a review which focuses in on a few of Saint Rebor‘s stories  and (taking a cue from Roberts’s introduction) attempts to examine how – on the structural and linguistic levels – they exploit the tensions between ‘science’ and ‘fiction’. I hope you find it interesting.