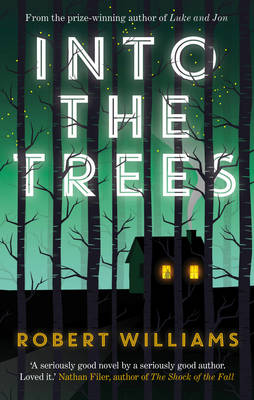 It begins with a knock on the door: Harriet Norton answers to find four masked men, who want a word with her father. We move back eight years, when Thomas and Ann Norton move to their secluded barn conversion in the forest, purely because it seems to be the only place where baby Harriet doesn’t cry. This is a nicely handled opening by Robert Williams: it evokes the characters’ mixed emotions (a combination of guilt at doing this, and resignation that something had to be done). It sets a theme of decisions being taken at a particular moment, and going to have longer-term consequences. And it throws the reader off balance, because it’s a tragicomic situation following that dramatic prologue.

We may then expect (which is to say, I expected) Into the Trees to start working towards that confrontation with the masked men. This it does, but more quickly than I anticipated, so the actual confrontation plays out about a third of the way in. For the whole of that first third, I had the wonderful sense (rarer than one might imagine) of not knowing at all where the book might head.

It settled down eventually into a thoughtful exploration of the personal consequences of such a dramatic event. Besides the Nortons, Williams’ other key characters are Raymond Farren, a misfit farm labourer who becomes friends (of sorts) with Thomas; and Raymond’s neighbour Keith Sullivan, who feels short-changed by life and is determined to set things right. Each protagonist is challenged by the novel’s events: Thomas is shaken by the thought that he can’t protect his family, which puts strain on his relationship with Ann; Raymond finds the stability in his life under threat; Keith may get what he wants, but struggles to hold on to it. All in all, Into the Trees is engaging stuff; thanks to Ray Robinson for bringing it to my attention.