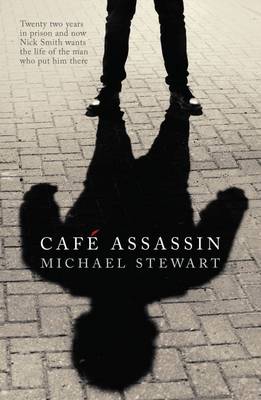 A few years ago, I enjoyed Michael Stewart’s debut novel, King Crow – so I was really pleased to discover that he had a new book out. Café Assassin is quite different in subject from its predecessor, but it has the same tension, rooted in a strong first-person voice that feels as though it could go anywhere.

The owner of that voice is Nick Smith, newly released from prison twenty-two years after being wrongly convicted of murder. His words are addressed to Andrew Honour, a childhood friend on whom Nick now seeks revenge. Nick looks at Andrew’s life – a successful job as a QC, happily married to his old girlfriend Liv, on whom Nick always had a crush – and wants what he sees. Over the course of the novel, Nick gets back on his feet, and gradually inveigles his way into Andrew’s and Liv’s lives – but to what end?

I found Café Assassin to have an enormous narrative pull, which comes from the ambivalent attitude we develop towards Nick: we know he has seriously been wronged, but we also learn what a violent individual he can be; we want Nick to have some sort of resolution, but not necessarily the kind of revenge it appears he’s working towards. Beyond the plot, there’s a mutable quality to Stewart’s prose, and the sense of identity Nick creates in his account. Nick has to remind himself that it’s not 1989 but 2011, and there a constant sense of dislocation as the gap of years is opened and bridged and opened again. Then there are the interstitial chapters in second-person, which describe Nick’s life in prison; these aren’t a straightforward contrast with the first-person text, but intersect with it at right-angles, adding a further layer of complexity. If we never quite know where Café Assassin will end up, perhaps it’s because we never quite have the measure of its protagonist – and the sense is that perhaps he doesn’t even have the full measure of himself.