A weekend of novellas (contents may not be as advertised)

After my run of reading novellas last month, I decided to do the same again. Except some of these definitely aren’t noevllas, and I didn’t read them all at the weekend. Anyway…

Andrew Kaufman, All My Friends Are Superheroes (2003)

This was Kaufman’s first book, and the delightful imagination that he put to such great effect in books like Born Weird is on display here, too. It’s the story of Tom, an ordinary guy who married a superhero, the Perfectionist. But trouble soon came calling: on the couple’s wedding day, Hypno, the Perfectionist’s ex, hypnotised her into thinking that Tom was invisible; now she’s flying to Vancouver to begin a new life, and Tom needs to find a way to make her see him. Kaufman’s novella is peppered with vignettes of superheroes whose powers are often based on personality traits (such as the Frog-Kisser, who can ‘transform geeks into winners’ but then loses her attraction to them; or Mr Opportunity, who knocks on doors but is rarely answered). The rest of the book has the same charming mixture of the quirkily fantastical and a heart of everyday (but is it really?) emotion.

This pamphlet from the Belgium-based publisher MIEL is a collection of bon mots from the titular Uncle Zoltán; these are by turns whimsical, fantastical, and absurd. For example:

We had a tiled stove with wings. Occasionally it would squwak and hover a foot or so off the ground, said Uncle Zoltán.

Always pack three umbrellas, one for heavy rain, one for light rain, and one for no rain, said Uncle Zoltán. A dry umbrella is consoling.

So many of these delightful snippets send the imagination off into a sideways world where all the strangeness makes sense; one also starts to imagine what kind of character Uncle Zoltán might be, built up indirectly from the fragments of reported speech. I’m not sure there’s much more I can say, because Uncle Zoltán is very much a book that lives in the reading. 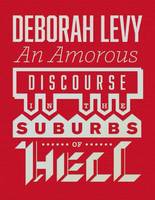 Deborah Levy, An Amorous Discourse in the Suburbs of Hell (1990)

Newly reissued by And Other Stories as an attractive little hardback, this is a poem: a dialogue between an angel and an accountant, which evokes the push and pull of the mundane and the transcendent, the heat of desire and a quieter contentment. Rather like Uncle Zoltán, Levy’s book encourages you to focus in on the language (and even, in this case, the arrangement of words on the page). AS much as I enjoyed it, though, I find it difficult to separate out a quote from An Amorous Discourse. Here’s a video (hosted by the Irish Times) of Levy reading from it instead

Aliya Whiteley can usually be relied upon for engaging stories with a dark twist, and The Beauty (published by Unsung Stories) is no exception. It focuses on a group of men living in a time when the female population has died out (the cause is unspecified) and the details of geography and history have become hazy; the Group relies on its storyteller Nate to retain the memory of what matters. One day, strange fungus begins to appear on the graves of the Group’s women, growing into silent, faceless female figures dubbed ‘the Beauty.’ What follows is a story that leaves the reader’s thoughts and sympathies in flux – on the one hand, there’s the moral issue of how the men treat the Beauty; on the other is the question of whether the Beauty themselves are benign. The vagueness of time and place, and the starkness of the Group’s world, only add to that sense of uncertainty.

I got a very enthusiastic reaction on Twitter when I mentioned that I had this lined up to read; though I perhaps wouldn’t quite go that far myself, it’s certainly very good. Train Dreams moves back and forth through the life of Robert Grainier, a labourer born in 1889 who would go on to witness enormous change in the twentieth century. Johnson evokes the raw nature of life and landscape in Grainier’s American West; and includes memorable glimpses of others’ personal tragedies, such as that of Kootenai Bob, the old Native American who got drunk for the first (and last) time, then went to lie down on the rail track. The fragmented structure of Train Dreams serves to underline the essential; nature of Grainier’s life: unstable but enduring, haunted by the past but always with a future around the corner, for good or ill.

This is one of four ghost stories which have been published in new individual editions by Galley Beggar Press. I have to admit that I’d never heard of A.L. Barker prior to reading Lost Journey, but this story was such fun that I’ll have to seek out more of her work. Barker’s narrator spots two striking figures in the street: an old woman with no legs, who travels around in an orange box on wheels; and her beautiful companion, who pushes her. Led by his libido, the narrator falls in with them; the old woman, Gerda Charles, turns out to be four hundred years old, and searching for a way to die. There’s a wry glee to this story; much of its energy comes from watching the narrator being strung along by forces outside his control, and seeing just where he’ll end up.