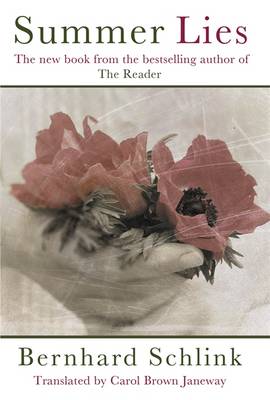 I should say first of all that the only thing I knew about Bernhard Schlink prior to reading this story collection was that he wrote The Reader – and I haven’t read that novel, nor seen the film. So I came to Summer Lies pretty much cold.

I’d sum this book up as a collection of stories about loss. The protagonists tend to be middle-aged (usually men), generally successful, but often with the nagging sense that things are starting to slip (or have slipped) away. I like the title, Summer Lies, as a reflection of this: it could mean lies that last a golden season; or (and I don’t know if this pun works in the original German) that summer itself is lying – that the good things are not just transient, but in a sense were never really there at all.

I’m going to pick out two contrasting stories to illustrate Schlink’s approach. The writer protagonist of ‘The Night in Baden-Baden’ is either lying to himself or simply doesn’t care. As the story starts, he has taken Therese to Baden-Baden, to see the opening night of his first play. All well and good, except that Therese isn’t his girlfriend. His actual girlfriend, Anne, doesn’t like him seeing other women; he can’t understand why, and wonders why she doesn’t see that he’s bothered with all the travelling Anne does for her job as an academic. They’ve both chosen their paths in life, he reasons, so these are the consequences.

Our man is adept at justifying his actions to himself, and that includes withholding the truth from Anne (‘He wasn’t presenting anyone with a false picture.He was presenting sketches rather than pictures, and sketches aren’t false, because that’s all they are—sketches,’ p. 55). He’s not so good at comprehending why the two of them drift apart when Anne eventually finds out about Baden-Baden. Whatever he has lost by that happening… well, he’ll probably find something else to replace it. As a study of a quite obnoxious character, ‘The Night in Baden-Baden’ works well.

‘After the Season’ is the story of a holiday romance, a typical young lovers’ whirlwind – except these two are just either side of forty. Richard, a German flautist living in New York, meets Susan, a Los Angeles-based American who works for a theatre foundation. The pair bond over a shared love of music, and end up planning their future together, even though they know it can’t last.

Theirs is a romance born from the freedom of being away from their normal lives – so, when the time comes for them to return, the relationship can’t be sustained. Richard in particular doesn’t realise until that moment how much he is invested in his partnership with Susan; like the protagonist of ‘The Night in Baden-Baden’, he has either been fooling himself or willingly ignoring the truth – but, as he’s more open emotionally, Richard’s reaction is rather different. He is facing the sudden loss of summer, and is not prepared for the autumn.

Elsewhere
Read a story from the collection: ‘Johann Sebastian Bach on Ruegen’
Some other blogs on Summer Lies: Winstonsdad; Lizzy’s Literary Life; Julie Fisher for Bookmunch.