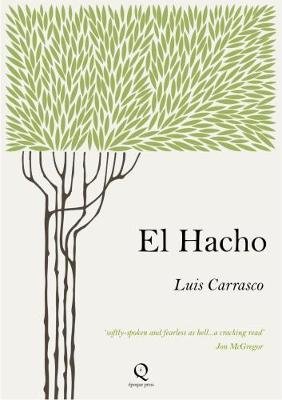 Today’s book is a debut in two senses: the first novel by Gloucestershire-based writer Luis Carrasco, and the first title from publisher Époque Press. For both of them, it’s a fine start.

El Hacho – “the beacon” – is the Andalusian mountain on whose slopes Curro has spent his life farming olives. But times are tough: a prolonged drought threatens to ruin the current crop. Curro’s brother Jose-Marie is in favour of selling off El Hacho for its stone to be quarried – but he’s never been involved in the family farm, doesn’t understand the soul of the place. As Curro says to his brother:

You might say I lack ambition but that land is an extension of my own body. I could no more leave it than tear the tongue from my mouth. When I work it I stir the memory of our people into the fragile dust and every drop of sweat, every callous on my hand and groan in my joints is theirs as well as mine. To abandon it would be to abandon myself and that I cannot do.

El Hacho, then, is in part a tale of tradition versus modernity, but it does not come across as sentimental. Carrasco is clear on what the personal costs to Curro of selling the mountain would be, but also on the price he pays for staying. The story of El Hacho’s drought also becomes the personal story of Curro’s wish for life to go on as it has.

There is a certain timeless quality to El Hacho: it’s not completely out of time, but there’s not much to place it in a specific period. The story reads pretty much as though it could take place at any point over (say) the last sixty years. So, as well as being the tale of one particular farmer, El Hacho feels emblematic of a story that could play out over and over again, in many different times or places.