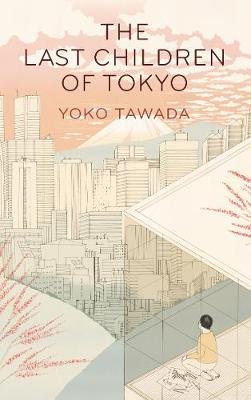 Yoko Tawada is a Japanese writer living in Germany, who writes in both German and (as is the case with this book) Japanese. The Last Children of Tokyo is set some time after a catastrophe has ruined at least part of the world. Japan has isolated itself, with even foreign words largely banned. Children are weak and sickly, while the old may yet live on and on: someone in their seventies is merely ‘young-elderly’. Yoshiro is a hundred years old, but there is no sense that he may be reaching the end of his road:

The years are recorded in rings inside the trunk of a tree, but how was time recorded in his own body? Time didn’t spread out gradually, ring after ring, nor was it lined up neatly in a row; could it just be a disorderly pile, like the inside of a drawer no one ever bothers to straighten?

Yoshiro’s main concern in life is to care for his great-grandson Mumei, a boy who loves his Illustrated Guide to Animals, even though he’ll never see many of the creatures depicted in it (that’s if they’re still around). Though Yoshiro would like to look after Mumei’s health, the information on child health changes so fast these days that he feels it’s hardly worth keeping up: “Unable to foresee what sort of fate awaited Mumei in the future, Yoshiro kept his eyes open, taking each day as it came, hoping the present wouldn’t crumble under his feet.” The Last Children of Tokyo is in large part a portrait of Yoshiro skating along on the surface of that fragile present (not just with Mumei, but also with the two generations of his family between).

The world of Tawada’s novel is strange and striking: giant mutant dandelions grow rampant, and certain words have been replaced with more palatable expressions (orphans, for example, are now referred to as “independent children”). This world exists at a point where the reader’s ability to rationalise what may have happened between now and then is balanced finely against the characters’ fading knowledge. It leaves the reader in the same precarious position as Yoshiro: we can’t envision the edges of Tawada’s world, and therefore can’t be certain of where its story will lead. Things are indeed grim, but there may be hope… if you know where to look.

The US edition of this book is titled The Emissary and published by New Directions.