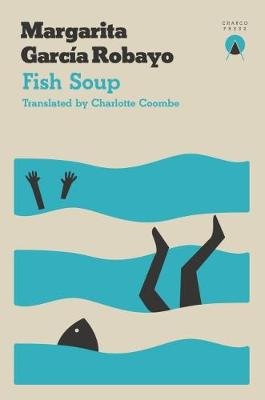 Here’s one last book for Spanish and Portuguese Literature Months and Women in Translation Month. It’s the English-language debut of Colombian writer Margarita García Robayo: a compendium of short fiction translated by Charlotte Coombe and published by Edinburgh-based Charco Press, who specialise in Latin American literature. It’s a wonderfully sardonic set of stories.

Fish Soup is bookended by two novellas. In the first, Waiting for a Hurricane, a young woman longs to leave her home by the sea for… well, something more (“you realise nothing’s going to arrive and you’ll have to go looking for it instead,” she reflects). The narrator embarks on a series of relationships which she hopes will facilitate an escape (for example, she takes a job as an air hostess, then becomes involved with the Captain), but doesn’t appreciate what impact all this is having on her family, her lovers, and herself.

The closing Sexual Education is previously unpublished. It’s narrated by a student at a Catholic school who is part of a group taking a new abstinence class in place of standard sex education. However, what she’s being taught in class is rather different from what’s going on among her social group. For example, one girl is being persuaded by an older boy that a certain sexual position is not sinful, but actually allowed by the catechism. The narrator isn’t fooled:

The darkest mysteries – the Holy Trinity, the Immaculate Conception, the Holy Grail – all became much clearer after being doctored by some con man who wanted something in return: a bag of coins, divine grace, Karina’s ass. It was all the same.

As so often in García Robayo’s stories, this bitter humour sits alongside something much darker. If Waiting for the Hurricane is the story of someone who refuses to see what she’s doing to herself and the world around her, the protagonist of Sexual Education is forced to question herself deeply.

Between the two novellas in Fish Soup is a collection of seven short stories with the overall title Worse Things. These pieces frequently feature protagonists who are distanced from life in some way; the stories then often lead to a point of change (or at least reflection). So, for example, in ‘You Are Here’, news of an accident at the airport and an awkward conversation with a young woman at his hotel give a businessman cause to face up to the emptiness in his life. In ‘Better Than Me’, an academic tries to persuade his estranged daughter to let him visit her; it’s a case of closely examining his life to find what might enable him to speak to her. In ‘Like a Pariah’, a woman with cancer has retreated to an old country house to convalesce, but her relationships with others may prove as difficult to handle (if not more so) than any illness.

There’s a lot to like in Fish Soup, and a distinctive voice to explore. I’m already looking forward to re-reading it.