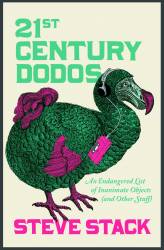 That fine blogger, short story reader, book-swap organiser, and all-round top bloke, Scott Pack, is on a blog tour for his new book (written under his open-secret pseudonym, Steve Stack), 21st Century Dodos. The book is a compendium of once-everyday things (from VHS to the Green Cross Code Man and half-day closing) which have now either disappeared or are close to doing so; I can recommend it as one of those books that you start browsing and then find hard to put back down.

For this blog post, I thought it would be interesting to apply the concept of 21st Century Dodos to books; I’ll hand over to Scott to say more…

My new book, 21st Century Dodos, takes a look at over 100 inanimate objects that are on the verge of extinction. Some of them have vanished already. When David invited me over to blogsit today, he asked me to suggest three endangered books that I’d like to see revived.

It will be a pleasure.

Nowadays, of course, in this age of eBay, abebooks.com and Amazon Marketplace, pretty much any book can be tracked down – at a price. Thankfully, each of these literary dodos are available if you are prepared to put in a bit of effort online, but you are highly unlikely to find them in any bookshops.

The House of Nire by Morio Kita has never had an official UK publication, although you can get hold of English language copies from the States. It is actually two books in one – The House of Nire and The Fall of the House of Nire – which were written and published in the mid-1980s. Together they form an epic (750+ pages of small type) comic novel charting the fortunes and misfortunes of the Nire family, owners of an insane asylum in Japan between the wars. Its broad scope and cast of bizarre and unforgettable characters is reminiscent, in some respects, of Gormenghast but I wouldn’t want to labour that comparison.

It also gives a rare insight, to our modern eyes, into a period of Japanese history that is poorly served by Western literature, or by available translations. For example, reading The House of Nire was the first and only time I had heard mention of kaiten – manned kamikaze torpedoes – one of which is piloted by a Nire son during World War Two.

I am surprised that this hasn’t surfaced as a Penguin or Vintage Classic. Perhaps it will now that I’ve mentioned it. I am sure they hang on my every word.

Phil Ochs was a lesser-known contemporary of Bob Dylan and Joan Baez. A friend, for a while, of both, he was never to achieve the same level of fame, partly because he stuck with protest songs for longer than they did, and partly because he was a volatile, divisive character. He eventually succumbed to alcoholism and depression but not before he had recorded some of the finest protest music of the 60s and a number of truly beautiful folk songs.

His life story is remarkably similar to that of comedian Andrew Kaufman – complete with bizarre alter-ego – and that story is captured by his friend Marc Eliot in Phil Ochs: Death of a Rebel. Even if you are not familiar with Ochs’ music, it is a fascinating and disturbing tale. I would recommend it to anyone interested in that period of American music. It also has a number of great Dylan stories.

If you were a young man during the 1980s, then chances are you will remember that sex scene from the movie Betty Blue. It was one of the most popular French movies of that decade, was nominated for an Oscar, a BAFTA and a whole host of Cesars, and Beatrice Dalle looked amazing in it.

What most people don’t know is that the movie was based on a book by Phillipe Djian, a book that is even better than the movie. And I say that as a big fan of the film version. It is the only book by Djian to have been translated into English but it is wonderful and well worth seeking out.

So there you have them, my three literary dodos. It would be amazing if you were prompted to read one of them following this blog post, but do make sure you read it after you have dipped into 21st Century Dodos!

Thanks for those, Scott! I’m particularly intrigued by the sound of The House of Nire, myself. If you’d like to catch up on Scott’s bloggish travels, yesterday Claire Marriott ran an extract from the book, about milk bottle deliveries; and tomorrow, Scott will be hosted by Catherine Ryan Howard. The full itinerary for the tour is also available on Scott’s blog.