The latest Peirene title is translated from Bosnian, but its title nods to Japan. Kintsugi refers to the art of mending pottery with lacquer mixed with gold, so that the broken edges are highlighted rather than hidden. Senka Marić’s protagonist discovers a lump at the start of this novel, which leads to a diagnosis of breast cancer. The rest of the book chronicles her changing relationship to her body as she undergoes treatment.

Be warned, the protagonist’s experience is vividly – at times brutally – described; but that’s also what gives the book is power. Marić depicts the protagonist struggling to come to terms with what’s happening to her, but also a gradual sense that these changes are becoming part of her, like the cracks in a work of kintsugi.

The novel is also structured in a way that reflects the idea of kintsugi: short chapters, not just from the present but also the protagonist’s childhood. In other words: pieces of her life, the joins visible, that are put together into this striking work. 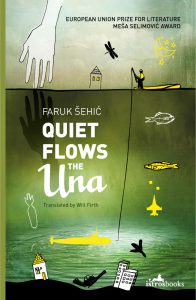