Tell Them of Battles, Kings and Elephants – Mathias Enard 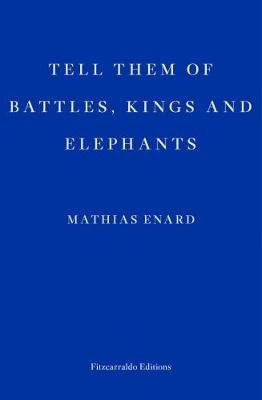 In Charlotte Mandell’s latest translation of his work, Mathias Enard takes us to 1506, when a 31-year-old Michelangelo arrives in Constantinople, having been invited by Sultan Bayezid II to design a bridge. The Constantinople that Michangelo visits is a confluence of cultures: “the Empire was no longer Roman and not really the Empire; the city swayed between Ottomans, Greeks, Jews and Latins”.

Enard’s novel is full of meeting-points: the bridge itself as a symbol, but also the drawing out of conflicting parts of Michelangelo’character (the frugal man who holds back versus the side of him that’s happy to embrace his new experiences), for example. There’s also a triangle (maybe a wedge) of relationships: Michelangelo is guided through Constantinople by a poet named Meishi, who comes to fall in love with the artist. But Michelangelo only has eyes for an Andalusia singer.

Unlike the other books of Enard’s that I’ve read (Zone and Compass), Tell Them of Battles, Kings and Elephants is short and comprised mostly of brief chapters; this lends the novel a feeling of space and lightness, which in turn feeds into the sense that Enard’s tale hangs over something darker. It appears in reality that Michelangelo did not accept the Sultan’s invitation, but Enard has used historical fragments to imagine that he might have, and there are occasional asides which draw attention to the artifice. At the beginning: “No one knows the name of the Greek dragoman waiting for [Michelangelo], so we’ll call him Manuel”. Later: “Of course, Michelangelo is not now thinking of these frescoes, which he will bring into being three years from now, and which will earn him even more measureless glory; right now, he just has a bridge in mind…”

So, Enard’s novel ends up poised between past and future, and the effect of these asides is precisely to pull the reader out, remind us that what we’re reading is a tissue of words, a bright curtain over the reality where this (probably) never happened. This is also what the novel’s title points to: it’s taken from Kipling, but is spoken by the Andalusian singer in one of the chapters where she addresses Michelangelo as she shares his bed:

You conquer people by telling them of battles, kings, elephants and marvellous beings; by speaking to them about the happiness they will find beyond death…Tell them about all of that, and they will love you: they will make you the equal of a god. But you will know, since you are here pressed against me, you ill-smelling Frank whom chance has brought to my hands, you will know that this is nothing but a perfumed veil hiding the eternal suffering of night.

In other words, fabulous stories function as seductive distractions from cold reality; they would fall apart like a collapsing bridge if placed under enough strain. This is what gives Tell Them an thread of sharpness which emerges from the book’s airy surfaces without warning