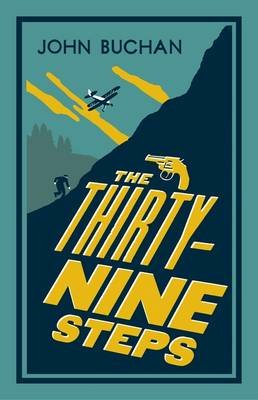 ​Today I’m looking at an oldie (first published 1915) that I haven’t read before (or seen the film, etc – I know, I know…). Thanks to Alma Books for providing a copy of their smart new paperback edition, and thereby the impetus to read it.

You probably know the outline, but anyway: finding England too dull, Richard Hannay is on the verge of going back to South Africa when he is approached by an American named Scudder. In Hannay’s London flat, Scudder tells a seemingly outlandish tale of spies and planned assassination – outlandish, that is, until Hannay finds Scudder dead the following morning, and himself in the frame for murder.

I found it best to approach The Thirty-Nine Steps as a pure adventure story – and I had such a fantastic time of it. There are so many lucky coincidences that I essentially had to get rid of my disbelief; but that really wasn’t hard when the book offered so much enjoyment in return. The distance between me and the language of the book became the gateway to a world where these coincidences could happen.

I think of The Thirty-Nine Steps as falling roughly into two halves. In the first half, Hannay goes on the run, trying to stay ahead of both the police and those who really killed Scudder. Hannay decides to head to Scotland, where he was born; there are some splendid depictions of landscape and action sequences. Here is an example of the latter, where Hannay is forced to drive off the road, into a hedge:

My car slithered through the hedge like butter, and then gave a sickening plunge forward. I saw what was coming, leapt on the seat and would have jumped out. But a branch of hawthorn got me in the chest, lifted me up and held me, while a ton or two of expensive metal slipped below me, bucked and pitched, and then dropped with an almighty smash fifty feet to the bed of the stream.

In the second ‘half’ (as I think of it), Hannay has found allies and been able to set the record straight; now he tries to foil the plot that he’s uncovered. Maybe this stretch of the novel doesn’t have quite the same level of brisk excitement as the first, but it’s still nicely tense all the same. What a pleasure it’s been to ‘discover’ The Thirty-Nine Steps after all this time.