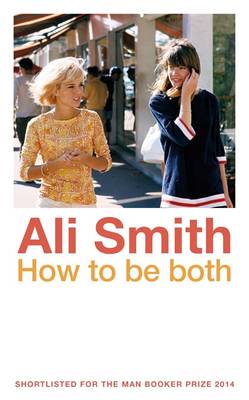 So much is in the timing: for years I never read Ali Smith (no particular reason; she was just one of those writers I never got around to). My first was Artful, a couple of years ago; I liked it, but it didn’t strike me as a good way into the author’s work. Now felt like a good time to try again: as I want to explore ‘experimental’ fiction (I don’t much like that term, but it’ll do for what I mean), and have resolved to savour the tide of words more when reading, Smith seemed an author I might respond to well. And so it proved.

Perhaps the first thing to make clear about How to be both is which version I read. The novel is in two parts, one focusing on a girl named George who lives in present-day England, the other on the Renaissance Italian painter Francesco del Cossa. The order in which the two halves are presented varies between copies, and you can’t tell from the outside which is which. Alan Bowden asked me on Twitter which version I had; ‘George first,’ I told him. He replied, ‘I can’t imagine reading it that way.’ It’s testament to Smith’s skill that I can’t imagine reading How to be both the other way around (I can see where the connections would be, but so logically does Del Cossa’s half follow on from George’s that the sense of the experience eludes me. I’m sure I’d feel the same had I read the other version – which I fully intend to do one day).

As its title suggests, How to be both is full of duality and mirroring. Both sections collapse the sense of linear time: George’s story moves between her present life, and a few months earlier when her mother was still alive; Del Cossa tells of his life in the fifteenth century, but has also been incarnated as a spirit in the present, where he shadows George. As George also views Del Cossa’s frescoes, the two protagonists observe and are observed by each other, in their own strange loop. So really, both sections come before each other; although I do feel that most of the novel’s emotional weight likes in George’s half. Then again, Del Cossa’s art is intrinsic to making it all happen. You still need both halves to make up the whole.

For all that How to be both dissolves chronological boundaries for the reader, the passage of time remains of central importance to the characters, especially George. She still struggles to comprehend a world in which her mother is no longer alive, and the gap of those few months between life and death is ultimately as vast for George as that between her own time and her mother’s youth in the 1960s – another life that the girl can’t truly envisage. When George’s mother first takes her daughter to see Del Cossa’s paintings in Italy, George can’t see the relevance, can’t see the layers of meaning that her mother can. With time, though, she’s able to do so, thereby bringing the past closer (her intense observation of the artist’s work is what brings Del Cossa’s spirit back); it’s also symbolic of George starting to come to terms with what has happened.

I must mention Smith’s prose, which flows like a river changing course unexpectedly: past and present, dialogue and description, action and reflection merge into one another, always with an unstoppable momentum. After this, Ali Smith goes on to my list of must-read authors – and not before time.