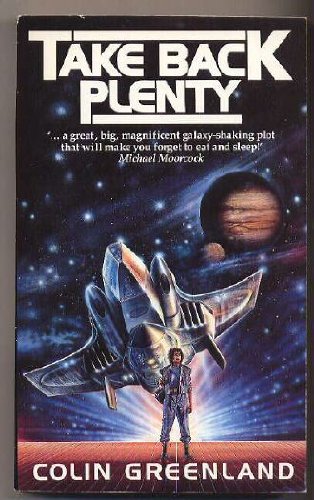 The novel on this year’s Clarke Award shortlist that stuck out as being most anomalous was Chris Wooding’s Retribution Falls, because it was the kind of exuberant adventure sf which tends not to do well at the Clarke. Probably the last time a book of that kind won was back in 1991, when the Clarke went to Take Back Plenty by Colin Greenland, a novel which also has a reputation as being one of the founding texts of the ‘New British Space Opera’ that’s flourished in the past two decades.

Quite a weight of expectation, then – but I’m pleased to say that, a few references to ‘tapes’ aside, Take Back Plenty holds up remarkably well today. Partly, I think, this is because the particular twist that Greenland puts on his setting hasn’t (as far as I know) been employed much since; and party it’s because of its sheer brio and sense of fun.

Take Back Plenty is set in the future of a different universe, a universe in which there really are canals on Mars and swampy jungles on Venus. Numerous alien species have made themselves known to humanity and populated the Solar System; but no one can leave, thanks to a barrier put in place by the mysterious Capellans. Greenland’s protagonist is Tabitha Jute, pilot of the Alice Liddell, who starts the novel in trouble with the authorities on Mars, and takes on a passenger because she needs the money to pay a fine. But that passenger. Marco Metz, and the other members of his entertainment troupe, may turn out to be more trouble than they’re worth.

I doubt it’s any coincidence that Greenland starts the novel during Carnival and names the ship after the girl who inspired Alice’s Adventures in Wonderland, because Take Back Plenty is a parade of incident and colour. Tabitha and colleagues hurtle out of one scrape and into another, but never with a sense of being all-conquering heroes – Tabitha is very much an ordinary, fallible human being; the Alice Liddell gradually falls to bits; and her passengers hinder as much as they help. Yet the rhythm of the story is as it should be: just when you think things can’t get worse, they do; and just when you think there’s no hope, there is. Greenland walks a fine line, but I think he gets the balance just right – Take Back Plenty is self-aware enough to recognise its absurdities, yet it’s also celebratory in its sense of fun, without either being ironic about it or skimping on substance.

The novel is also wonderfully written. Tabitha has periodic conversations with her ship’s AI persona; in what I think is a rather brilliant touch, the Alice Liddell seems to communicate at times in the style of the ELIZA program. Then there’s Greenland’s superb eye for description:

Carnival in Schiaparelli. The canals are thronged with tour buses, the bridges festooned with banners. Balloons escape and fireworks fly. The city seethes in the smoky red light. Though officers of the Eladeldi can be seen patrolling everywhere, pleasure is the only master. Shall we go to the Ruby Pool? To watch the glider duels over the al-Kazara? Or to the old city, where the cavernous ancient silos throb with the latest raga, and the wine of Astarte quickens the veins of the young and beautiful? A thousand smells, of sausages and sweat, phosphorus and patchouli, mingle promiscuously in the arcades. Glasses clash and cutlery clatters in the all-night cantinas where drunken revellers confuse the robot waiters and flee along the colonnades, their bills unpaid, their breath streaming in the thin and wintry air. (6)

I love the vivid details in that passage, and the rhythm of the sentences… just great. Take Back Plenty has stood the test of time so far, and I think it will continue to do so. I’d say it’s a worthy winner of the Clarke Award, and it shows just what adventure sf can be.