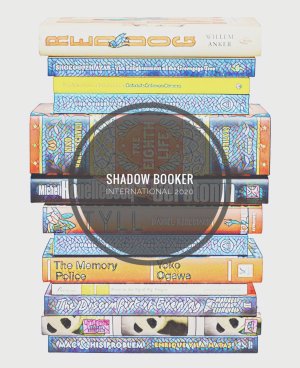 The official announcement of the winner of the 2020 International Booker Prize has been postponed until later in the summer, to give readers more time to get and read copies of the novels.

But our shadow jury of bloggers and reviewers of translated fiction has already completed our reading and re-reading, so it seems fitting to announce our Shadow Winner on the original date of May 19th.

As a reminder our own shortlist was, in alphabetical order of the original author’s name:

We were collectively impressed with all of these books, indeed all six had their champions among us.

And three books in particular were so close in our deliberations and our voting that it was almost tempting to go one further than last year’s anglophone Booker judges.  But instead we’ve kept with one winner, but decided to acknowledge two books as Runners-Up.

Runners-Up:
The Other Name: Septology I-II
and
The Enlightenment of the Greengage Tree

Jon Fosse’s “slow prose”, unfolding his story in one long, flowing stream that reads with great fluidity, took us deep inside his narrator Asle’s mind and thoughts. And we were caught up in the heady mixture of Persian myth, story-telling and magic realism of The Enlightenment of the Greengage Tree, a true ode to literature and to the deeply soothing role books and stories play in our survival of trauma.

But the winner of our 2020 Shadow Jury Prize is:
Hurricane Season, written by Fernanda Melchor, translated by Sophie Hughes and published by Fitzcarraldo Editions

Comments from some of our judges:

“Hurricane Season is an appropriate title for a novel that roars into the unsuspecting reader’s mind, with its long and winding sentences, and its refusal to flinch from the brutalities of its world.”

“There is anger, pain, and the understanding of the role literature plays when it comes to compassion and empathy.”

“As author M. John Harrison said of Melchor’s novel ‘…she had shown me things I needed to be faced with.’ and expanded my understanding of lives so very different from my own.”

“It unflinchingly portrayed a world apart from us and artfully created another layer of distance from subject through the use of mythologized violence. That she both creates distance and ‘makes us look’ simultaneously was incredibly powerful for me.”

“Melchor’s prose, in Hughes’s stunning translation, is raw, brutal and so, so necessary.”

“As readers and intrepid voyagers down Melchor’s Dante-like vision, we are like riveted inmates, incarcerated either by law or by economics or gender, who stand to witness the depravity, despair and pain being inflicted upon this part of the world. The real evidence and reward here is not in unmasking the Witch’s killer or killers or in finding out why this happened, the true recompense of Melchor’s novel is to pay tribute by listening to the dead’s testimony,‘there is no treasure in there, no gold or silver or diamonds or anything more than a searing pain that refuses to go away.’”

And our congratulations extend to the publisher Fitzcarraldo Editions who provided two of our top three, and also now have two Shadow Prize wins in three years.

Now it’s over to the official jury for their decision.

Our shadow jury of bloggers and reviewers of translated fiction has completed our reading of the International Booker 2020 longlist, and has chosen our own Shadow Shortlist.

In alphabetical order of the original author’s name our chosen six books are:

Firstly, we would like to congratulate the judges on choosing a very strong longlist. There are some stunning books on the list, and almost all of them, including those that missed out on our shortlist, had their champions among us. The books didn’t always make for an easy read – some are quite graphic in their depiction of violence – but certainly a thought provoking one.

You will see that four of our choices overlap with those of the official jury.

The Adventures of China Iron impressed many of us, but couldn’t quite squeeze on to our list. Instead we chose the cleverly connected short stories from Faces on the Tip of My Tongue.

When we were predicting books on the longlist The Eighth Life was the novel we most expected to see given its undoubted popularity both in the Anglosphere but also internationally. And we had expected it to make both the official and our shadow shortlist. Somewhat to our surprise, it missed out on both – the magic of the hot chocolate clearly doesn’t work on everyone.

We were though more surprised, and disappointed, at the exclusion of The Other Name from the official list – Jon Fosse’s trademark slow prose is stunning, and it makes for a very different reading experience from the others on the list. It is a timeless novel, and we fear the jury’s not unreasonable focus on novels relevant for the Covid-19 era may have counted against it. But with the next volume due in the autumn perhaps Fosse will make next year’s shortlist and he’s also overdue the Nobel Prize.

At the other end of the spectrum, the officially shortlisted Tyll didn’t spark much enthusiasm in our panel. But the one provoking the strongest reactions was Serotonin: several of the books on our shortlist are brutal or visceral but parts of Houllebecq’s novel simply felt gratuitous. Only three of our judges finished reading it and none of those were terribly impressed by its inclusion on the longlist.

We’ll now embark on the period of further re-reading, reflection and to choose our winner. We wonder if we and the official jury will see eye to eye as we did in 2018, or reach a different view as we did last year.

Thanks to shadow panellist Paul Fulcher for writing these words.

(Links are to my reviews.)

That’s a good shortlist. I’m not a great fan of Tyll, but I wouldn’t argue with the rest. The Memory Police is probably my favourite.

The shadow panel will be announcing our shortlist next week. I wonder how similar (or different) it will be to the official one.

A selection of titles from the International Booker Prize longlist…

Hurricane Season is an appropriate title for a novel that roars into the unsuspecting reader’s mind, with its long and winding sentences, and its refusal to flinch from the brutalities of its world.

Set in a Mexican village, Melchor’s book begins with the murder of a woman known as “the Witch”, whose house is rumoured to hide a stash of treasure. Subsequent chapters unpeel the events that led to the killing, and show the dark realities of life in this community.

It’s a powerful translation by Sophie Hughes, and a novel that’s not soon forgotten.

Tyll Ulenspiegel, the main character of this novel, is based on a trickster figure from medieval German folklore. Kehlmann brings him forward in time to the Thirty Years’ War (1618-48). Tyll escapes the childhood village where his father is accused of witchcraft, and as an adult becomes a travelling entertainer and court jester.

Kehlmann’s novel is at its best when Tyll is at centre-stage, the prankster who breaks through the superstitions and mores of his society. When he isn’t front and centre… well, it probably helps to know about the historical background. Overall, though, Tyll is engaging and enjoyable. ⁣

Shokoofeh Azar, The Enlightenment of the Greengage Tree (2017)
Translated from the Persian by an anonymous translator

Following the 1979 Revolution, Bahar’s family were forced to flee Tehran for the small village of Razan, seeking to maintain their intellectual freedom, and at least some sort of continuity in life.

But the authorities catch up with them eventually. As the novel begins in 1988, Bahar’s mother has climbed a greengage tree and apparently attained enlightenment. At the same time, Bahar’s brother has been executed elsewhere. Brightness and brutality are intermingled in the text. ⁣

Azar’s novel is full of stories within stories, and the supernatural is never far away (even Bahar, our narrator, is a ghost). It’s compelling to read, delightful and powerful in equal measure.⁣

It’s International Booker Prize time, and once again I’ll be reading along and reviewing where I can. The longlist was announced this morning, so here’s what we’ve got:

Okay, well… To date, I have read two of these: the Pagano (which I liked) and the Ogawa (which I really liked, but I’m reviewing it for Strange Horizons so you’ll have to wait to find out more…). It’s great to see Schweblin and Vila-Matas on here, and I’m excited to explore the rest. How much I’ll get through is another question, because some of these books are quite long (and the Haratischvili is very long indeed). But I don’t want to rush – we’ll just see what happens.

As always, I will be taking part in the shadow panel to choose our own shortlist and winner. This year, I will be joined by Stu, Frances, Bellezza, Vivek, Barbara, Paul, Antonomasia and Oisin. I wish us all – and you – an enjoyable journey.