My favourite books read in 2016

This time last year, I wrote that I wanted to understand more deeply why I respond to some books as I do. I think I’m on the way there, and certainly when I look at the books that have stood out most to me in the reading year, I can see a continuity. They belong together in ways that reflect what, how and why I read.

So, here’s the selection: these are the books that I count as my strongest reading experiences of 2016, roughly in ascending order. The links will take you to my reviews. 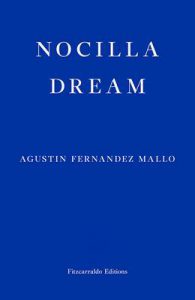 12. Nocilla Dream (2006) by Agustín Fernández Mallo
Translated from the Spanish by Thomas Bunstead, 2015

A novel that feels like a statement of how fiction should relate to the wider world in the 21st century. Nocilla Dream is an assemblage of adapted quotations and character vignettes, with recurring images and locations… but it won’t fit together into a stable whole, however much you try. Like the globalised world it depicts, Fernández Mallo’s novel has no centre; reading it was an experience  of glimpsing a deeper meaning through the haze, only for that to recede shortly after.

In a Middle Eastern city, the flow of life has been disrupted by a bureaucracy that forces people to queue for days on end in order to obtain authorisation for the smallest things. This is a novel that works through quietness and precision: its measured tone persuades one to accept the reality of this situation; then, the chilling implications unfold. A similar process occurs with the city’s inhabitants, as all the queueing changes the way they think and behave, until there’s no easy way for them to imagine something else.

This was a book that seemed superficially light: a fictionalised account of the author’s time in Paris in the 1970s, where he sought to live like Hemingway. But as I carried on reading, the novel circled around issues of reality and imagination – how the place in the mind can endure longer and loom larger than the real one. That led me to confront the basic questions of what it is to read fiction: ultimately, nothing in Vila-Matas’ book is solid, but the reading of it persists regardless.

9. Tainaron: Mail from Another City (1985) by Leena Krohn
Translated from the Finnish by Hildi Hawkins, 2004

I didn’t get around to reviewing this one, and I really must. Like The Queue, Tainaron is precisely balanced on a knife-edge between reality and unreality. It’s told a series of letters sent home from someone living in a city of giant insects – a city that might be more a state of mind than an actual place. For me, this is on a par with Viriconium in terms of dismantling the certainties of story, and the disorientation that follows in the reading. 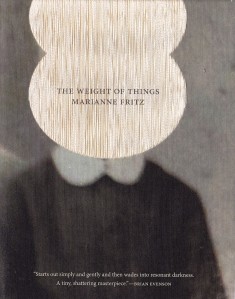 8. The Weight of Things (1978) by Marianne Fritz
Translated from the German by Adrian Nathan West, 2015

The Weight of Things is the short opening slice of a much larger, untranslated (and possibly untranslatable) fictional project – and the shadow of two world wars looms over its apparently small tale of a couple visiting the husband’s ex-wife in her asylum. Broken chronology destroys the sense that there can be progression beyond the fictional present; and there’s one moment cuts though the reading as much as in any book I’ve experienced. At the time, I described reading Fritz’s book as like waking from a beautiful nightmare, and I still feel the same.

Here’s a book where it really is all about the language: the rhythm, the pulse, the interplay of voices. Lucien travels to the newly seceded ‘City-State’, intending to concentrate on his writing – but he gets caught up in other matters. The city has its own soundtrack of voices, bewildering and exhilarating to Lucien and the reader alike. The protagonist tries to bring his own language to the city, but all he can do is merge into its web; likewise, the best way I found to read Tram 83 was to lose myself in its words.

This is the second novel on my list set amid the streets of Paris, but shows writing transformed by place in a different way. The Paris of Rhys’s protagonist is so quietly anonymous that the present day fades in comparison to the memories that continue to haunt her. This was my first time reading Rhys; I found her novel so piercing that I must read more.

5. Like a Mule Bringing Ice Cream to the Sun (2016) by Sarah Ladipo Manyika

I love this book for the way that Manyika slides between viewpoints to explore the gap between an individual’s self-perception and the person by others. Retired literature professor Morayo breaks her hip and has to move temporarily into a nursing home – and suddenly she is a vulnerable old woman to people who don’t know her. Reading the novel, and being able to see all sides, allows the gap to be bridged. That Morayo is one of the most delightful protagonists I’ve encountered all year is a welcome bonus. 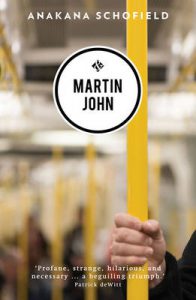 Schofield’s novel takes readers inside the mind of a flasher – not so much in a way that tries to explain him as one that challenges the reader to engage with his character. While most novels are organised to create meaning for the reader, Martin John is arranged to create meaning for its protagonist, constructed around his loops and preoccupations. This is what makes it such a strong, disorienting experience: there is no map of this novel’s singular landscape.

3. Mend the Living (2014) by Maylis de Kerangal
Translated from the French by Jessica Moore, 2016

At one level, Mend the Living is a novel about a heart transplant. At another level, it’s an all-pervading cloud of language which explores the different meanings of this event, and the human body itself, as life effectively passes from one individual to another. At times, reading de Kernagal’s book was like having several extra senses with which to perceive what was being narrated.

2016 was when I finally introduced myself to Woolf’s work, and not before time. I read five of her books, and liked some more than others; but the first one I read is still the most vivid. Mrs Dalloway showed me a different way to read, as I found a novel in which events take place at the level of thought and consciousness, as much as in geographical space. There’s such power in being brought so close to the characters’ viewpoints and flowing between them. And the ending, which brings the horror of war crashing directly into Clarissa Dalloway’s polite society, is one of my year’s finest reading moments.

I thought about it for a long time, but there was no escaping the conclusion that a Han Kang book would top my list for the second year in a row. Like The Vegetarian, Human Acts is a novel of the body, but this time as the level at which to process conflict (or try to do so). Though there’s violence and bloodshed on a large scale in Han’s depiction of the Gwagju Uprising, it is the small human movements that I found most vivid. That contrast helped to create the strongest experience ofall the books I read this year. 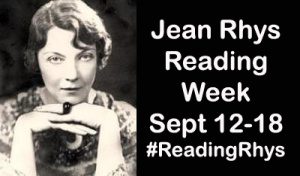 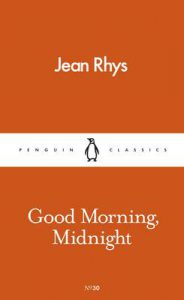 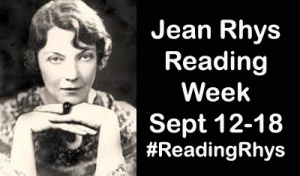 Today is the start of Jean Rhys Reading Week, a blogging event hosted by JacquiWine and Lonesome Reader. I’m joining in because Rhys is one of the (many) holes in my reading history. Up until this point, she was really just a name to me. But now… now, she’s someone I want to read again, and whom I could see becoming a favourite writer.

The Jean Rhys book that I chose to read first was Good Morning, Midnight (1939), mainly because it had recently been reissued as a Pocket Penguin, and I need only the flimsiest pretext to buy one of those… I’ll write more on the book itself later in the week; but I just wanted to start by sharing one of the passages that really stood out to me. Rhys’s protagonist, Sasha, is alone and adrift in Paris; here, she imagines walking through the city:

Walking in the night with the dark houses over you, like monsters. If you have money and friends, houses are just houses with steps and a front-door – friendly houses where the door opens and somebody meets you, smiling. If you are quite secure and your roots are well struck in, they know. They stand back respectfully, waiting for the poor devil without any friends and without any money. Then they step forward, the waiting houses, to frown and crush. No hospitable doors, no lit windows, just frowning darkness. Frowning and leering and sneering, the houses, one after another. Tall cubes of darkness, with two lighted eyes at the top to sneer. And they know who to frown at. They know as well as the policeman on the corner, and don’t you worry…

I love the progression of the imagery in that paragraph: the way that it moves from innocuous description of houses to malevolent personification; and how the language itself breaks down into rhythmic patterns (“frowning and leering and sneering”) to reflect the narrator’s heightened mood. And this is far from the only instance of powerful writing in Good Morning, Midnight – but that’s a post for another day…