The winner of the Goldsmiths Prize 2016 will be announced this Wednesday, so hera is my second round-up of the shortlist (the first is here). Unfortunately, I ran out of time to review Rachel Cusk’s Transit, which leaves two others: first-time Goldsmiths appearances for small publishers Tramp Press and Cassava Republic. 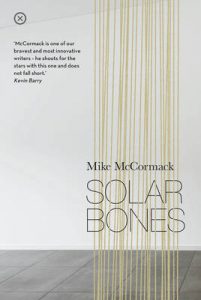 If you look Solar Bones up, be warned that the blurb contains a piece of information which is not stated explicitly within the novel until the end (though it can be deduced). It’s not really set up to be a twist as such, and I think that knowing it would change your experience of reading the book rather than spoil it per se… but I don’t need to reveal it here, so I won’t.

Anyway: we join engineer Marcus Conway as he returns to his County Mayo home, the sound of the Angelus bell from the village church ringing in his ears. Over the course of the novel, Marcus ruminates on his life and the world; as so often on this shortlist, it’s all in the telling:

this may have been my first moment of anxious worry about the world, the first instance of my mind spiraling beyond the immediate environs of

hearth, home and parish, towards

the wider world beyond

since looking at those engine parts spread across the floor my imagination took fright and soared to some wider, cataclysmic conclusion about how the universe itself was bolted and screwed together…

This is Marcus Conway’s voice: no capital letters or full stops –therefore no strict separation of ideas – and ‘paragraphs’ linked by those chains of sentence-fragments in an unceasing flow. Whether he’s discussing his memories, the economy, or the bones of reality itself, all is part of the same whole for Marcus. As an engineer, he is able to see the workings and connections – and McCormack brings this to life within the form of his novel. 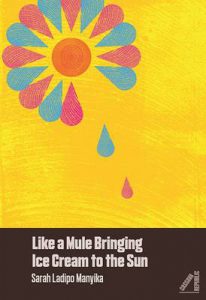 Sarah Ladipo Manyika, Like a Mule Bringing Ice Cream to the Sun (2016)

A few years ago, I read Roelof Bakker’s anthology Still, a book of short stories inspired by his photographs of a vacated building.  It included ‘Morayo’, a story about an old woman going into a nursing home, and what her books meant to her as a person. In a Q&A at the time, Manyika said she was working on a book-length version of the story. I always wondered what that was going to be like; and now here it is, on the Goldmsiths shortlist.

Manyika’s novel is not a direct expansion of the story, but the main character and themes are broadly the same. Morayo Da Silva is a retired literature professor, from Nigeria and now living in San Francisco. She still lives life to the full, enjoys her vintage Porsche, her books, and generally being around the neighbourhood… until she slips one day, and breaks her hip. Then she has to go into a nursing home to recover, and her old life is torn from her.

One of the central themes of Like a Mule for me is the idea that the person someone is on the inside may not necessarily be the person that others see. Morayo is such an exuberant character to us – a joy to spend time with on the page – but, as far as many of the staff in the home are concerned, she’s just another patient. There’s one scene where Morayo daydreams of a glamorous function from her old life married to an ambassador – a dream which is broken when the home staff rush to her aid because she’s left her walker behind.

In Goldsmiths Prize terms, I’d say that Like a Mule distorts the novel form primarily with its use of voice. Besides Morayo, there are chapters written from the viewpoint of several of the other characters she meets: a homeless woman, a shopkeeper, a cook in the nursing home. True, there’s nothing intrinsically unusual about that; but it’s done here in a way that feels disjointed, underlining the distance between individuals. Reading the novel allows us to bridge that distance to an extent, as we can fit the pieces together; and maybe that helps bring a sense of hope, too.