Never Any End to Paris by Enrique Vila-Matas 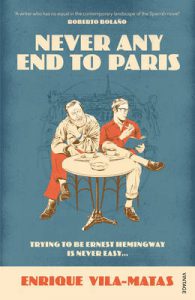 I like to think I’m over it by now, but sometimes I still have to tell myself: it’s not about the subject matter. That is to say, whether or not the ostensible subject matter of a novel appeals to me is not a reliable indicator of how I’m going to respond to the book. Self-imposed starvation, high school scandals, coppers going off the rails, society parties… They’ve all featured in fiction that rewired my inner universe, because it wasn’t the topic that counted, but the interplay of language, theme and image. Still, if Never Any End to Paris had not been written by Enrique Vila-Matas –had I not trusted him after Dublinesque – I might not have read this book. That would have been a mistake.

Never Any End to Paris is presented as the text of a three-day lecture delivered by Vila-Matas, dealing principally withthe period in the 1970s when he lived in Paris, in a garret owned by the writer Marguerite Duras. Back then, he wanted to live a life like that depicted by Ernest Hemingway in A Moveable Feast; and was trying to write his first novel, The Lettered Assassin – a novel with which, Vila-Matas says, he wanted to kill his readers. There’s drily absurd humour to be found in the author’s exploits:

…I was a walking nightmare. I identified youth with despair and despair with the colour black. I dressed in black from head to toe. I bought myself two pairs of glasses, two identical pairs, which I didn’t need at all, I bought them to look more intellectual. And I began smoking a pipe, which I judged (perhaps influenced by photos of Jean-Paul Sartre in the Café de Flore) to look more interesting than taking drags on mere cigarettes. But I only smoked the pipe in public, as I couldn’t afford to spend much money on aromatic tobacco.

But look beneath these trappings… the real subject of Vila-Matas’ ‘lecture’ is irony, and irony permeates the novel. We see the young Vila-Matas in Paris playing the part of a certain kind of writer; and performing politics more than actually believing in a given position. But then I discover from David Winters’ essay on Never Any End to Paris that Le asesina ilustrada was actually Vila-Matas’ second novel, not his first; so how much of the history here can we really trust?

Then again, asks Vila-Matas, what happens to irony when you see something in real life? What does it even mean to see something in real life, anyway? The author talks about longing to visit New York, then being disappointed with the place, because the reality of it couldn’t live up to his dream. Vila-Matas also describes how he’d seen on film the study where Trotsky was assassinated, then visited it in real life and found the experience unnerving:

Again, the imaginary location looms larger than the real one. But what is ‘real’, here? Look closely enough at Never Any End to Paris, and nothing remains solid: there’s no city beyond the descriptions on the page; no narrator beyond the ‘I’ whose voice we accept; no lecture beyond a framing device; no novel beyond that to which we are prepared to give consent. But of course this is true of all novels, and readers consent to the realities of fiction routinely. Vila-Matas’ approach makes us confront both perspectives – the fictional ‘reality’ and the mechanics of the construction – at the same time.

There is never any end to Paris, Vila-Matas assures us – the Paris of his imagination, that is:

In reality, there is an end even to this Paris: you just close the book. Equally, of course, there is indeed no end to Paris, because it persists in the mind, and will emerge again whenever the book is read.