Sometimes, choosing to read a book is a matter of trust. Maybe a particular book doesn’t sound as though it would appeal; but if the recommendation comes from a trusted source, or the book is by a favourite author, that might be enough to persuade one to give the book a try.

In the case of Nevada Days, I was trusting the publisher. Bernardo Atxaga was a new writer to me; this book is a fictionalised memoir covering the nine months he spent as writer-in-residence of the Center for Basque Studies at the University of Nevada in Reno. On the face of it, this probably isn’t the kind of book I would choose to introduce myself to a writer’s work – but I trust MacLehose Press to publish interesting books, and it worked before with Per Olov Enquist’s The Wandering Pine, so why not?

Anyway, I took a chance; and I’m glad I did. 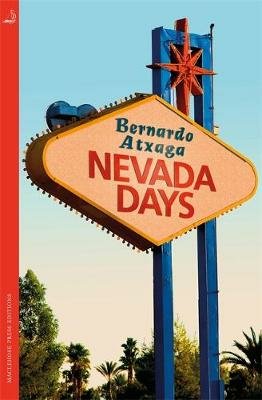 Atxaga arrives in Reno on 18 August 2007, with his wife Ángela (who will be conducting research there) and their daughters Sara and Izaskun. They move into a small house used by the university to lodge visiting writers. We are soon introduced to a core cast of vivid secondary characters, including Mary Lore Bidart, director of the Center for Basque Studies; Bob Earle, the exuberant retired academic who becomes the Atxagas’ new neighbour; and Dennis, the university IT officer with a fascination for insects.

Along with his work at the university, Atxaga makes a number of trips into the desert and further afield. All adds up to make Nevada Days an engrossing travelogue. Here is Atxaga reflecting on the mountains in the Nevada desert, in one of the letters to his friend L. that appear throughout the text:

Looking at those mountains – far, far, far away, so far away that the most distant ones looked like mere maquettes – I was keenly aware of the world’s utter indifference to us. This wasn’t just an idea either, but something more physical, more emotional, which troubled me and made me feel like crying. I understood then that the mountains were in a different place entirely. They weren’t distant from me in the way a bird in Sicily is distant from a tree in Nevada, but, as I said, in a different place entirely.

I chose this extract because it highlights something I was constantly reminded of while reading Nevada Days: namely, that Atxaga’s account is a shaped version of reality. In this passage, he’s working through the process of finding the right words to capture his experience.

But Nevada Days is also organised in a way that lends it certain themes. One that stands out to me is moral ambivalence, introduced when Atxaga’s daughters feel sorry for King Kong when he is shot at the end of the film; and again for a drug trafficker whom they see being arrested:

What connection was there between justice and compassion? How far should society go to protect itself? What should the city do with King Kong?

Atxaga peppers his account of Nevada with memories and stories of the Basque Country; these tend to illustrate examples of where the line between right and wrong might be blurred. For instance, he tells of the famed Basque boxer Paulino Uzcudun, presenting him as an ambivalent figure, celebrated as a fighter but also later known as a strong supporter of Franco. Atxaga also recounts how he himself was out dancing and meeting girls as a teenager at the same time as his autistic cousin José Francisco was struggling in his residential school, where one day he swallowed some pieces of metal that killed him. The author asks if his younger self should be blamed for being indifferent to his cousin, when he was essentially following urges that young people have. No answer is forthcoming.

After Atxaga’s main account of Reno is finished, a couple of further sections serve to tie up the book thematically and cast it in a new light. The author includes phone calls home to his elderly mother in the main text; and, though these are often amusing, it’s still clear enough that something serious is going on. A closing chapter recounts her funeral: it’s structured in the same way as the main text – present-day narration mixed with stories and memories – but intercut much more rapidly. This chapter suggests that an extraordinary event such as a death in the family takes us to its own separate place, and only gradually do we return to our everyday lives. The pace and choppiness of the chapter create that sense of experiencing a heightened reality. But mirroring the structure of the main text suggests that the period represented by the book may have been a “separate place” in reality for Atxaga and his family.

Closing Nevada Days is a series of document extracts that close off two narrative strands from the main text: a string of sexual assaults and a murder on campus; and the disappearance of the adventurer Steve Fossett. Both of these have previously been left open like plot strands in a novel – and they’ve had the same narrative tension – but their sudden, matter-of-fact closure reinforces that reality doesn’t have the arrangement of fiction after all. In a way, we’re also back to the theme of moral ambivalence, asking whether it’s right to gain narrative pleasure from such real events. But then, that’s what fiction naturally enables, isn’t it? But then again…

Considering that I was unsure of giving Nevada Days a whirl in the first place, the reading of it (and, indeed, the writing of this review) has given me so much to think about, I feel very happy to have taken the chance. I must also mention the design:this book is published as part of the new ‘MacLehose Press Editions’ series, in a handsome trade paperback (large, but not too large) with flaps. I’m glad to have Nevada Days a worthy addition to my library; and, actually, I think it will be a good starting point for exploring more of Bernardo Atxaga’s work.
T

Stu has also reviewed Nevada Days over at Winstonsdad’s Blog.