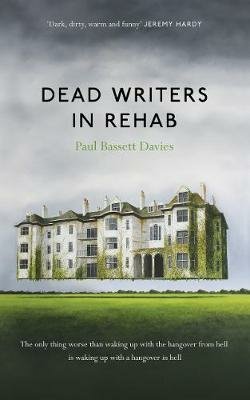 Debauched writer Foster James wakes one day in what appears to be a rehabilitation clinic, with no memory of how he got there. Adding to the mystery, the other patients are all famous writers – Ernest Hemingway, Wilkie Collins, Dorothy Parker, and others. But those writers are all dead… aren’t they? If so, what does that make Foster, who certainly feels alive? The secret to this place may lie with the strange figure glimpsed at the edge of the grounds… or perhaps with the on/off romance between the clinic’s two doctors.

Paul Bassett Davies has written for film, television and radio; Dead Writers in Rehab is his second novel, recently published by Unbound. It’s a splendid dark comedy: most of the chapters are in the form of patients’ “recovery diaries”, so you’ve got a parade of pastiche voices that is a joy to read. But, just when you think you have the novel pinned down, it reveals a serious heart – and changes shape more than once.

Dead Writers in Rehab determinedly follows its own path, which is a quality I love in fiction. In short, this book is a delight.

A version of this review was originally published on Twitter.