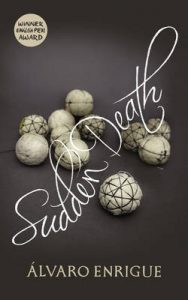 I’m back at Shiny New Books with a review of a new Mexican novel: Álvaro Enrigue’s Sudden Death (translated by Natasha Wimmer). As I note in my introduction, there’s some really exciting fiction from Mexico appearing in my translation (see my posts on books by Yuri Herrera, Paulette Jonguitud, and Juan Pablo Villalobos, for example); Sudden Death is no exception.

How to describe it, though? The novel is built around a game of tennis between Caravaggio and the Spanish poet Francisco de Quevedo. But it also deals with the forces that shaped the formation of the modern world in the 16th and 17th centuries – and which, perhaps, still help to shape the world today.  A synopsis can’t do it justice; you just have to read it.