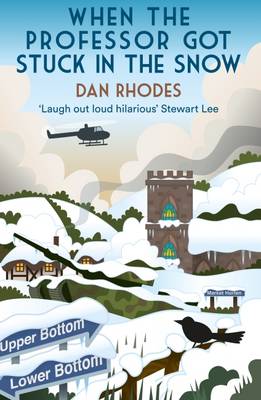 When the Professor Got Stuck in the Snow

Have I mentioned how much I enjoy reading Dan Rhodes? Of course I have: see previous reviews of Gold, Little Hands Clapping, and Marry Me. But there’s enjoying a book, and then there’s this.

Rhodes’s latest novel (new in paperback from Aardvark Bureau), When the Professor Got Stuck in the Snow, sees Richard Dawkins and his put-upon assistant Smee, on the way to the village of Upper Bottom, where the Professor is due to address the All Bottoms Women’s Institute. But bad weather sees the pair stranded in Market Horton, where they end up staying with the local vicar and his wife…

First things first: this book is hilarious, the funniest I’ve read in ages. The Dawkins character is splendidly pompous, and Rhodes takes every opportunity to puncture him. To say much more about how he does so would risk taking away from the fun of reading the novel, which I don’t want to do. So here’s a quotation to give you an idea:

Smee was desperate to make up lost ground. ‘You are very kind, Professor.’

‘You are quite right. I have devoted swathes of my life to kindly telling people how ignorant they are, and correcting them, and giving them the opportunity to think as I do. Look at me now, traipsing through the countryside, taking only modest fees, sometimes no fee at all, as I inform the clueless that there is no God, just as there is no goblin with a purple face, and that  there is no consolation, none whatsoever, to be found in religion. If anybody is kind around here, Smee, it is me – and I am unanimous in that.’

The humour isn’t all targeted in one direction, though: Dawkins has to put up with facile questions from the residents of Market Horton, as well as requests for favours such as delivering kittens (the thinking being, he knows about science, so he must be able to do that sort of stuff). The novel reads like a broad, delightful (and sharp) cartoon.

Ah, but wait. Something else that I like about Dan Rhodes’s work is that he’ll create these cartoonish scenarios, and then suddenly show you something real underneath that transforms what you’ve been reading. He does it here, and I’d better not say any more; but if you read the book (which you should), you’ll see what I mean…

Okay, so this has ended up being one of those blog posts where I basically end up saying, “This book is great; please read it,” without going into an awful lot of detail as to why. Well, so be it. I want you to enjoy this book as much as I did, and I think the fewer specifics you know, the better. Just know that it’s Dan Rhodes on superb form.

When the Professor Got Stuck in the Snow (2014) by Dan Rhodes, Aardvark Bureau paperback

Tags: book review, books, Dan Rhodes, fiction, Reviews, When the Professor Got Stuck in the Snow