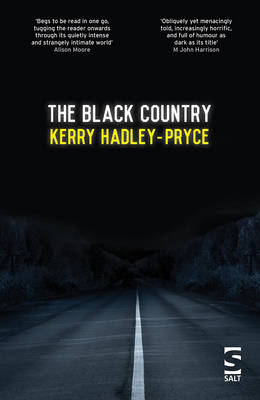 The Black Country: We Love This Book review

We Love This Book have my review of The Black Country, the fascinating debut novel by Kerry Hadley-Pryce (and another of Nicholas Royle’s finds for Salt Publishing, which include Ian Parkinson’s The Beginning of the End and Alison Moore’s The Lighthouse amongst others). It’s about a couple whose lives begin to disintegrate when they’re involved in a road accident one night – but the novel is transformed by its fuzzy prose style:

Harry pads out his memory of this day quite a bit. Maybe what he tells us is important. We’ll decide that. he tells of a time during the service when he reached for Maddie’s hand, prompted by what he calls a ‘prickle of a memory’ — Harry’s the type to say things like that — a prickle of a memory of a time when Gerald suggested the two of them work together, help each other out, pool ideas. So they worked together for the first time, reading some book or other. Harry says he wasn’t sure he got it, but Maddie did. Maddie got it, she understood it. If we let her, she#ll go on about how she found it all so brilliant, and Harry, being Harry, sort of fell for her then. That’s what he says.