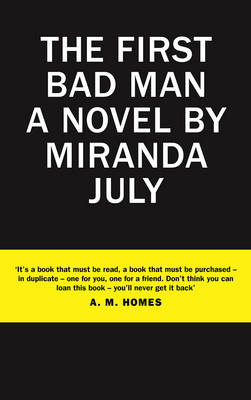 One of the words that I’ve seen bandied around in newspaper reviews of Miranda July’s novel is ‘quirky’. I can see where this view is coming from, but there are two main problems with it: one is that it’s inherently dismissive (as July herself puts it, it makes her sound like a little girl); the other is that it overlooks the specifics of what the novel actually does.

July’s narrator is fortysomething Cheryl Glickman, who works for a self-defence training company named Open Palm. She has eyes for Phillip, a colleague twenty years her senior; and imagines that certain young children she sees are Kubelko Bondy, a baby she was sent to play with once when she was nine. When Cheryl agrees to have her employers’ twenty-year-old daughter Clee move in, her careful household routine is disrupted – and things change even more when Clee becomes pregnant.

There’s a lot of artifice in the characters’ lives, but it seems to me that this is often a defence mechanism. Cheryl has worked out a system at home for streamlining day-to-day busywork, but the sense is that really it’s an excuse for disengaging. She goes to see a chromotherapist who rents an office for three days of the year, then makes an appointment with a psychologist who uses that office the rest of the time, and turns out to have been acting as the chromotherapist’s receptionist. When Cheryl overhears a conversation between the two, it reveals what a front they’ve been putting up.

The ‘first bad man’ of the title is not a character in the novel as such, but a figure in one of Open Plan’s DVD scenarios, a role taken on by Clee when she and Cheryl act the scenario out. This is an example of how relationships between the characters become performances. Another is Cheryl’s fantasies of Phillip mid-novel, where the lines between reality and imagination blur. Then there’s complicated dance of a relationship between Cheryl and Clee later on. In all, The First Bad Man is quite a powerful novel, whose characters’ eccentricities are central to creating that power.

Reviews of The First Bad Man by Naomi Frisby at The Writes of Woman, and John Self at Asylum.

« A round-up of recent reading Moving on… »