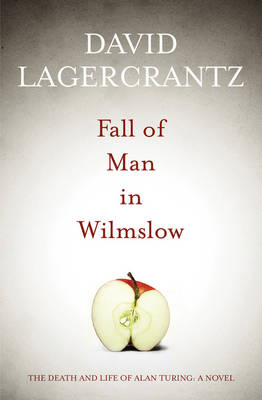 I’m slightly wary of fiction that centres on genuine historical figures. It comes from a personal preference: that I’m not particularly interested in using historical fiction to learn about history – I want the experience of reading fiction first and foremost. So I prefer something like Mrs. Hemingway, which casts its material into interesting fictional shapes, over a thinly-veiled historical biography. The line between the two is fine, and can be tricky to walk.

Despite my natural wariness, I was intrigued by the sound of this novel by David Lagercrantz (the author who’s continuing Steig Larsson’s Millennium series). Set in 1954, Fall of Man in Wilmslow (which is translated from the Swedish by George Goulding) focuses on Leonard Corell, a police detective investigating the death of Alan Turing, who has apparently killed himself with a poisoned apple.

Corell’s position means that he has to work backwards: at first he knows simply that Turing was convicted for performing homosexual acts. Only later does he learn about Turing’s mathematical work, and later still about his work at Bletchley Park. For me, this led to a curious inversion of what can often happen with translated fiction: rather than coming across unfamiliar terms, I actually knew more about Turing’s story (in outline, if not detail) than the protagonist. Perhaps that’s why I found that Fall of Man in Wilmslow never quite shook off its biographical aspect.

In terms of the novel-as-novel, Lagercrantz casts Corell as a part-reflection of Turing: for example, he has his own flashes of brilliance, being able to deduce the kind of secret work that Turing was undertaking at Bletchley, which brings him to the attention of those who would rather that such things were kept secret. It’s an interesting frame for Turing’s story, though perhaps inevitably Corell is not as compelling a figure as the mathematician. Fall of Man in Wilmslow walks that fine line, but not quite deftly enough.