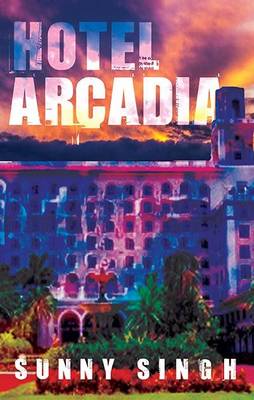 This was my first time reading Sunny Singh, who’s written two previous novels and a variety of non-fiction; after Hotel Arcadia, I clearly need to explore that earlier work. We begin as Sam, a war photographer, wakes to find that her hotel is under attack from terrorists; rather than stay in her room, she heads out to see what images she can find. She is observed and aided by Abhi in the manager’s office, who waits anxiously for help while his lover Dieter is among those being held hostage.

Hotel Arcadia revolves around the distance between image and reality. Singh highlights the tensions of contradiction inherent in Sam’s position: a photographer who brings the reality (but is it really?) conflict to people’s attention, yet who ultimately steps in and out of others’ war-ravaged lives, and makes art from their suffering. Abhi becomes an interesting point of comparison and contrast with her:: both characters chose careers of which their parents disapproved (one because she went close to war, the other because he stayed away from it). Both have also struggled to form long-term relationships – but, while Sam finds her partner pushed away, Abhi feels liberated by his casual (so far) liaison with Dieter.

Singh makes effective use of the artificial, enclosed environment of the hotel. The actual attack is pushed into the background, heightening the focus on the two characters, and turning the hotel into a kind of parody (though not a frivolous one) of Sam’s usual working environment. In this way, the Hotel Arcadia becomes a zone of denser reality in which whole lives can be lived in the space of a few days – and we, as readers, live them all too.