#IFFP2014 guest post: Jacqui on The Sorrow of Angels

Time for another IFFP guest review from my fellow shadow-juror Jacqui Patience. Last month, Jacqui looked at Ma Jian’s The Dark Road; now it’s The Sorrow of Angels by Jón Kalman Stefánsson. Of course, now the shortlists are out, we know that Stefánsson’s book made it on to the shadow shortlist but not the official one; I’m sad not to see it in the actual final six, as it has been one of the discoveries of the shadowing process for me.I’d go so far as to say that The Sorrow of Angels is the best written/translated book on the longlist; I’m still unsure what I think of the novel overall, but there’s a re-read to come before the shadow shortlisting.

Anyway, enough from me; here’s Jacqui… 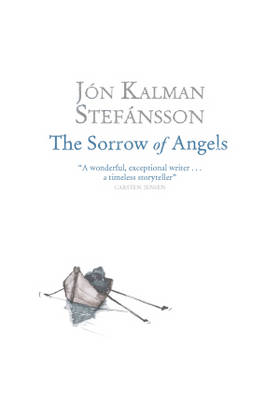 Jón Kalman Stefánsson’s The Sorrow of Angels is the second volume in a trilogy that began with Heaven and Hell (published in 2011). Set in a small fishing village in 19th-century Iceland, a place that feels close to the end of the world, the story opens with the arrival of Postman Jens in the community; he’s in a bad way, battered by the bitter wind and snow, almost frozen solid on his horse. After a short recovery, Jens is challenged by Sigurður (the local doctor and someone with considerable influence) to cover another postal route. The terrain is treacherous, ‘likely hellish after constant snowfall, relentless wind, only to be ventured by highly experienced travellers’ and our man is unfamiliar with the area. If Jens fails to deliver the post on time, his job will be at risk; if he succeeds, it strengthens his position against the doctor and there is no love lost between these two. Jens quickly accepts the mission, the prospect of getting one over on Sigurður being too tempting to resist.

However, the central character in The Sorrow of Angels is ‘the boy’ who, some quick research tells me, is the main protagonist in the earlier book Heaven and Hell. The boy, unnamed throughout, is dispatched to accompany Jens on his perilous journey to transport the mail in good time. The postman is afraid of the sea and would never make it alone over the fjord that forms the initial leg of their course. He needs someone with him who can ‘row him over, keep a decent pace with him on the trek’.

By now we’re about one-third of the way into the novel and it’s at this point that the narrative really kicks in for me. The expedition itself plays out over the remaining 200 pages and we follow the pair as they battle through blizzards and incessant winds, struggling to survive everything the environment seems determined to throw their way:

The snow piles up on them, they keep going, step-by-step, cold but undefeated. Then Jens falls for the fifth time. Perhaps because the land has started to rise; not much, but enough. It snows and snow blows over them, blows down from the mountain in enormous amounts, blows violently, it’s nearly impossible to breathe and Jens gropes feebly for the postal trumpet, tries to free it from his shoulder and hand it to the boy, opens his mouth to say something but his tongue is frozen, because first it’s words that freeze, then life. (pgs 139-140)

They forge ahead in their endeavour to deliver the mail. The occasional isolated farmhouse offers a brief respite from the elements and some welcome, if meagre, nourishment. It’s a world where visitors are few and far between, where the kindness of strangers is everything, where small gestures speak volumes:

The boy gulps his coffee to burn off the fatigue; he would have preferred to sleep longer, Jens sits with his head bowed but looks up when Jakobina returns with flatbread and butter; she’s tall, her movements are strong and graceful, her brown eyes meet those of the postman, she places the tray between them, brushing as if by accident, Jens’ hand, which rests solidly on the table. A hand that touches another hand in this way is saying something; Jens knows this but dares not respond. (pg 201)

Alongside their physical struggle to survive, there are other journeys taking place, other battles being fought. Jens, sullen and uncommunicative, is deep in thought wrestling with his feelings for Salvör, a woman who has experienced darkness in her past. He knows he should open his heart and express his feelings to her, otherwise he risks losing a chance to find contentment. But so far he’s been unable to commit.

The boy, meanwhile, is trying to anchor himself following the loss of loved ones. As an adolescent, he’s also grappling with new emotions and thoughts of Ragnheiður, a girl from the fishing village, flicker through his mind. Keen to talk, the boy probes Jens about the cause of his soul-searching.

During their journey Jens and the boy develop an understated, yet heartfelt, bond. They come dangerously close to losing one another on more than one occasion, but Jens remains mindful of the need to take care of his young companion. Up on the heaths and mountains, the space between life and death seems very narrow as we become acutely aware of the fragility of life.

Night is surely approaching and death is surely approaching, that invisible being, constantly lurking, stealing jewels, hoarding rubbish, doesn’t turn up its nose at anything, and sends fatigue, cold, hopelessness and surrender out ahead, four savage dogs that sniff out anything living in blind storms. (pg 181)

The Sorrow of Angels is a spellbinding novel, beautifully written in a lyrical, poetic style. Everything seems to flow effortlessly, from Stefánsson’s luminous prose through to Philip Roughton’s excellent translation. Stefánsson creates an ethereal, almost otherworldly atmosphere in this novel and it vividly captures man’s struggle with the adversities of life.

The publisher’s notes indicate that all parts of this trilogy can be read independently. However, having read The Sorrow of Angels, I do wish I’d had the time to start with Heaven and Hell before embarking on part two of the trilogy. I just felt a little disorientated at the beginning of the narrative and I’m sure I missed some of the nuances and subtleties in the interplay between characters in the village community.  That said, I’ve read thirteen of the fifteen books longlisted for this year’s IFFP and The Sorrow of Angels is most certainly in my top three. I’m delighted to see it in our shadow-group shortlist and the closing scenes left me yearning for the next part in the trilogy. And of course I shall have to go back and read Heaven and Hell to fill in those gaps.

The Sorrow of Angels is published in the UK by MacLehose Press.

Read Jacqui’s other IFFP reviews: Brief Loves that Live Forever; Butterflies in November; A Man in Love; A Meal in Winter; Revenge; Strange Weather in Tokyo; Ten; The Dark Road; The Mussel Feast; Back to Back;.