In the wake of The TV Book Club, four book bloggers (Lynne Hatwell of Dovegreyreader Scribbles, Simon Savidge of Savidge Reads, Kirsty of Other Stories, and Kimbofo of Reading Matters) have launched their own online reading group, which they’re calling ‘Not the TV Book Group’. The group will run fortnightly on Sundays for sixteen weeks, with discussions being hosted on each blog in turn. The schedule is:

21 Feb – Ali Shaw, The Girl with the Glass Feet

9 May – Jon Canter, A Short Gentleman

I thought it would be interesting to join in, which I’ll try to do for all eight books (though, of course, we’ll see how well I manage!). For now, though, let’s turn to the first selection, Brodeck’s Report by the French writer Philippe Claudel (very well translated by John Cullen). I’m hoping to make this review more reactive than usual, so I’ll be looking out for commentary elsewhere online and maybe updating this post as the day goes on (and, of course, commenting on the actual discussion when it goes live). First of all, here’swhat I thought: 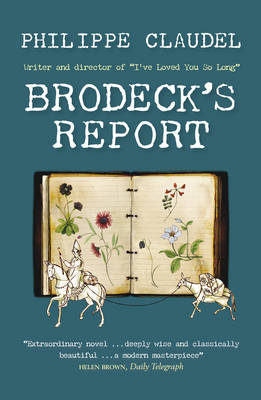 One night, in a remote village somewhere in post-war Europe (Claudel is deliberately vague about place and time in the novel), there is a murder. The victim is known only as ‘the Anderer‘ (‘the Other’), a colourful stranger who arrived in the village from who-knows-where, and immediately drew fascination (gradually turning to suspicion) with his unusual dress and manner.

The Anderer has been killed by men of the village, who ask Brodeck — a villager who didn’t witness those events, but has attended university and so (the logic goes) can write — to produce a report on what happened, so there can be an authoritative statement. Alongside his report, Brodeck writes a second account, which forms the text of Claudel’s novel; this longer account covers not only matters concerning the Anderer, but also key events of Brodeck’s life — including his time in a concentration camp.

Brodeck’s Report comes garlanded with many glowing quotes from newspaper reviews; I’m not quite as thoroughly enthusiastic about the novel as they appear to be, but I still think it’s a very good book. Claudel’s central theme, I think, is that, given the right circumstances, anyone could be party to monstrous acts; there are strong parallels between the villagers’ treatment of the Anderer, and Brodeck’s treatment by the camp guards — and even Brodeck himself is not entirely innocent. This is a powerful demonstration of how even apparently ordinary, decent individuals could come to do the worst.

One of the most striking things about Brodeck’s Report is Claudel’s construction of the novel. Instead of taking a linear approach, he moves backwards and forwards between times and events — sometimes even within the same passage — yet never loses his control over the narrative. As the threads swirl around and move inexorably towards their conclusions, the story itself becomes a kind of net, mirroring the way that the characters become snared by events, prejudice, and social pressures. Claudel’s prose (and, of course, Cullen’s translation) succeeds at more detailed levels, too; there are some very well written, highly affecting scenes (often concerning some of the plot’s most harrowing events).

I doubt I’d have read Brodeck’s Report if not for this book group (actually, never mind that, I wouldn’t even have heard of it) — but I’m glad I did, and I look forward to seeing what others have made of it.

11.10 – The discussion is now underway at Dovegreyreader Scribbles.