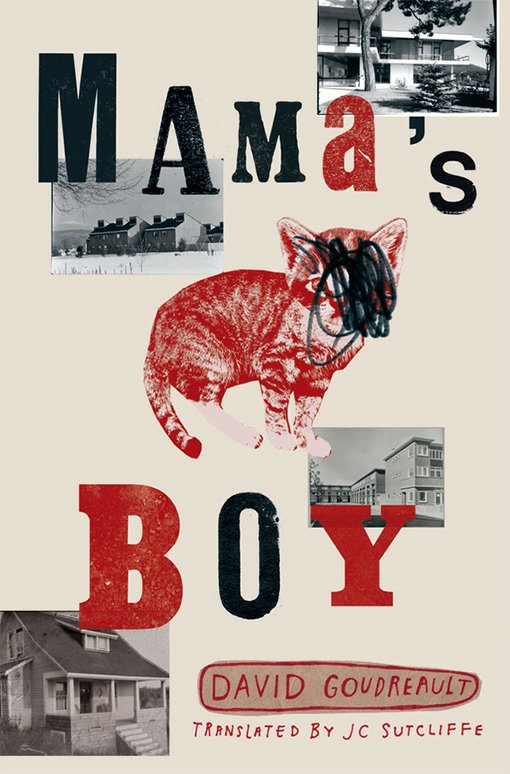 This is the second Quebecer novel from Book*hug that I was offered for review by the translator, JC Sutcliffe (the first was François Blais’ Document 1). Mama’s Boy is David Goudreault’s first novel, and the first in a trilogy. It is framed as the testimony/confession of an unnamed man, who was separated from his mother as a child after she repeatedly tried to kill herself. He burned his way through foster families, thanks to his penchant for things like torturing animals and stealing. Now, as an adult, he believes he has tracked down his mother in another town. Faking his CV, he takes a job near her as an animal health technician, waiting for the right time to introduce himself.

I find that Mama’s Boy hinges very much on its narrative voice. As you’ll have gathered, Goudreault’s protagonist is not terribly sympathetic (to put it mildly), but there is a certain dark charisma to him that made me want to continue reading. For example:

Year in, year out, I continued my education collecting diagnoses and failures. I had so much experience repeating grades that I could have gone into teaching. French was okay, but I flunked all the other subjects without so much as lifting a finger. Even art. I made myself dope pipes out of clay, and I drew nothing but naked ladies. I was studying curves and perspective. Great geniuses are always misunderstood.

As time goes on, it’s not so much that the narrator becomes more likeable, but that there’s a greater sense of the tragedy underpinning his life, which further enriches the book. At the end of Mama’s Boy, I have no idea what will happen to its protagonist next – but I am keen to find out.

Since my review of Document 1, Book*hug have posted videos of readings from their Spring Launch. So, now you can watch JC Sutcliffe reading extracts from both Mama’s Boy and Document 1.