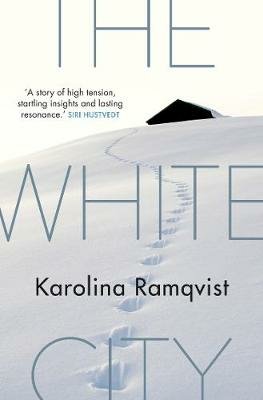 I have to admit, one of the main reasons I wanted to read this book was because it won the Per Olov Enquist Literary Prize; and I loved the one book of Enquist’s that I’ve read, so naturally I’m going to like a novel that won a prize named after him, aren’t I? Well, whether that’s sound reasoning or not, it worked: I liked The White City (Karolina Ramqvist’s English-language debut, translated from the Swedish by Saskia Vogel) very much.

Karin lives with her baby daughter Dream, in the mansion bought for her by her gangster husband John. But now John has ‘gone’ (the circumstances are not specified), and Karin’s life is crumbling around her, with the house due to be repossessed. Karin is desperate for a way out, even if that means heading further into John’s shadowy world.

The White City reads like a gangster thriller turned inside out: never mind the gangsters; this novel focuses on two people left behind. Karin’s viewpoint is disorienting at first, because she’s not so preoccupied with the background information that would be handy to us. Her world is in turmoil, and what she holds on to – what’s most vivid in her mind – is her daughter, and being a mother to Dream.

The strongest images at the start of the book are of weather and landscape – and body and movement. In this way, the ‘white city’ of the title is not just Stockholm; it can also be seen as Karin herself, coming to terms with motherhood. And there are still thrills there, ready and waiting for the right time. The White City is short and sharp – just as I like novels best.
Elsewhere