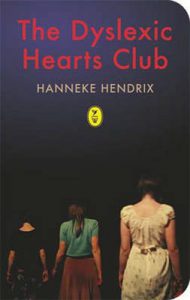 This is the first novel to appear in English by Dutch writer Hanneke Hendrix (the translation is by David Doherty). It has a delightfully dark streak of humour that put me in mind of Alina Bronsky’s work – always a good thing as far as I’m concerned.

Our narrator, Anna van Veen, wakes up in hospital with burns and a collapsed lung. She is sharing a room with two other burn patients; this isn’t necessarily the best situation for Anna, because she likes her own company:

When I stayed at home, people thought it reflected on them, that I meant something by it, that there was something wrong with them. You might think you’re playing the lead, the star of your own show, but when it comes right down to it you’re mostly just a bit player in other people’s lives. That’s how I see it, in any case.

She’s also not the best reader of people (in her husband’s words, she has a ‘dyslexic heart’). Still, here she is, with a couple of other misfits: a grouchy old woman named Vandersteen; and a younger woman who’s still too ill to speak (it turns out later that these two are named Anna as well). Something’s not quite right, though: the women’s room is guarded by a police officer; and the nurses who attend them seem less sympathetic to their situation than might be expected.

The events that led the trio to their hospital room are only gradually revealed – though things ramp up in the second half, when the women go on the run, and Anna goes from a ‘bit player’ to the uneasy co-star of her own road movie. I’m being cagey about the details because so much of the enjoyment of The Dyslexic Hearts Club comes from the uncertainty of wondering where it’s going to go. But I will say that it was worth the journey, and I’ll be looking out for more of Hendrix’s work in the future.