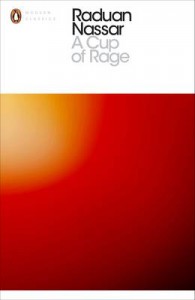 Time for the oldest and shortest book on the Man Booker International Prize list. Raduan Nassar is a Brazilian writer who published two main works: a novel, Ancient Tillage (1975), and this novella from 1978. A Cup of Rage concerns a farmer and his younger lover who spend the night together, then argue their relationship to splinters. The couple’s argument takes up 30 pages out of 45, so we are looking at a detailed game of power.

It’s worth mentioning at this point that each chapter of A Cup of Rage consists of one long sentence. Stefan Tobler’s translation really shines here, creating unstoppable torrents of words that carry the reader along in their wake:

For a few moments in the room we seemed to be two strangers observed by somebody, and that somebody was always her and me, the two had to watch what I was doing and not what she was doing, so I sat on the edge of the bed and calmly started taking off my shoes and socks, holding my bare feet in my hands and feeling how lovely and moist they were, as if pulled out of the earth that very minute…

I found that last image quite unsettling: it’s in keeping with an individual who’s so self-regarding, with such a high opinion of himself; and it shows just how uncomfortably close the book can bring us to this character. The thing is, when we get to the couple’s confrontation, the emphasis shifts from sensations to thoughts and actions. It’s still engaging, with rising tension and the upper hand shifting back and forth; I just found that it didn’t get under my skin in the same way as the earlier chapters. This makes it a little difficult for me to get a perspective on the book as a whole; it may be that I just have to put it down to personal taste.

Is it a shortlist contender?

For me, no. If I had found the main section as vivid as the earlier ones, it might well be in contention; and I wouldn’t rule it out from making the real shortlist. But I’ll be looking to other titles for my MBIP choice.

From the shadow panel, Stu has reviewed A Cup of Rage. I’d also point out Nicholas Lezard’s review in the Guardian; and there’s an article about Nassar by translator Stefan Tobler in the Independent.