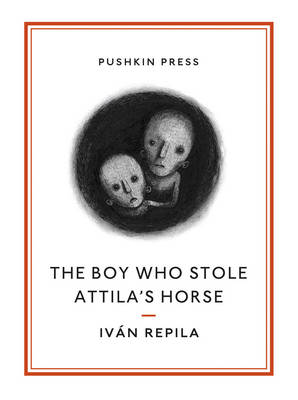 Sometimes the design of a book just hits the mark. The Boy Who Stole Attila’s Horse has the characteristic small paperback format of the Pushkin Collection, With David Roberts’s cover illustration, the physical volume has a timeless, ‘storybook’ quality – as does Iván Repila’s novel itself.

Repila tells of two brothers, Big and Small, who are trapped at the bottom of a well for reasons unknown, and are determined to get out. When attempting to throw Small out of the well doesn’t work, Big takes to exercise, keeping most of the food for himself– but that takes its toll on Small, so Big then has to look after him. Dreams and hallucinations abound as time passes. You can get a flavour for the writing from this passage, where Big and Small can hear animals approaching the well:

The steps become and more and more clear, and the sound of panting coming from the animals has taken over the night. Inside the well, the brothers’ stillness is catching the insects have stopped buzzing, the water has stilled in its tracks; at last, nature is silent. For a moment, the well slips its bonds and breathes like a home that the brothers don’t want to lose. The siege appears to be a fleeting assault. A wash of calm crawls up the walls, stills the mouth of the well and extends beyond its sheer edges to where the baying creatures howl. They go quiet, and for a split second the forest settles like an implosion of peace.

The translation from Spanish is by Sophie Hughes. I particularly like this passage for its use of personification, and the way the imagery transforms the physical space of the well. Each chapter brings a slightly different tone and perception; I could imagine The Boy Who Stole Attila’s Horse as a stylized animated film, its palette shifting with each scene.

It would be a dark film, too, because there’s a solemn allegory of metaphorical imprisonment lying beneath the surface story. It makes for a potent brew, and I hope we see more of Repila’s work in English before too long.

« Shiny New Books: Janice Galloway and the IFFP A round-up of recent reading »