"The letters, unbeknownst to their authors, had absorbed their entire surroundings"

Ioanna Bourazopoulou, What Lot’s Wife Saw (2007)
Translated from the Greek by Yannis Panas, 2013 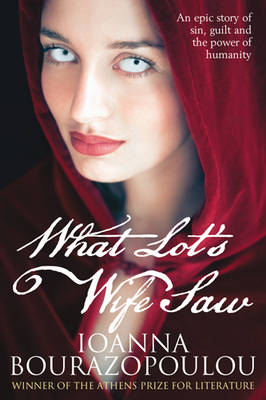 What Lot’s Wife Saw is a novel that shifts and evolves as you read it, until you can’t quite be sure what you thought you were looking at in the first place. The story goes that, at some point in the future, a great flood, dubbed the Overflow, has drowned much of the land; the world has become addicted to a violet salt mined in the Colony, a home for outcasts which is located by the Dead Sea and owned by the shadowy Consortium of Seventy-Five – and whose governor has mysteriously died.

In Paris, Phileas Book is inventor of the Epistleword, a kind of three-dimensional crossword puzzle derived from finding connections between newspaper readers’ letters. Book is hired by the Consortium to work out the truth of Governor Bera’s death, from the written testimonies of six members of his inner circle. All former criminals, the six are hoping that the past will stay in the past, and nurturing suspicions towards each other.

As well as being a novelist (this is her fifth, though the first to be translated into English), Ioanna Bourazopoulou is a playwright, and it seems to me that What Lot’s Wife Saw has quite a theatrical quality, particularly in its focus on a small group of characters in an enclosed environment (the Governor’s Palace, at least to begin with); and its background, which feels self-consciously stylised. I could vividly imagine some of the scenes acted out as though on stage, such as the six hapless letter-writers frantically trying to decide what to with the Governor’s body that they’ve unexpectedly discovered.

But, though episodes like this are amusing, there is a serious heart to What Lot’s Wife Saw. At first, the idea of the Epistleword seems largely a flourish, an extravagant way to give Phileas Book the investigatory skills for the task at hand. But then we learn what inspired the puzzle: Book was separated from his family by the Overflow; he read and re-read the letters he had from them, becoming deeply aware of the personality traces left embedded in the writing. He got a job at The Times in London, where he’d pore over the letters from missing persons, searching for those tell-tale traces. Book started to notice certain resonances and patterns among sets of letters; Yannis Panas’s translation captures the rush of insight:

[The letters] are transformed, they integrate and each letter now becomes vitally dependant on the others, one breathes with the lungs of the others and speaks with the other’s voice…the letters are by nature incomplete, like most human expressions, and they struggle for completion. They merge of their own accord, like atoms as dictated by their valences… (p.200)

Having seen these patterns in the letters, Book made a puzzle in the hope that the letter-writers might solve it and recognise themselves. So the Epistleword was born in dire circumstances, and in a belief that writing might have the capacity to reunite a family. This, I think, is central to What Lot’s Wife Saw: the power to solve a mystery is contained within the letters that Phileas Book (and we) read – and with it, the power for an individual to understand and shape the world. That’s also what makes the ending work for me: out of context, the solution to the mystery may seem trite; but, coming at the end of What Lot’s Wife Saw, it symbolises just how completely the world has become subverted by the text.

What Lot’s Wife Saw is published in the UK by Black & White Publishing.