"I saw life; I thought about death"

Karl Ove Knausgaard, A Death in the Family: My Struggle, Book 1 (2009)
Translated from the Norwegian by Don Bartlett (2012) 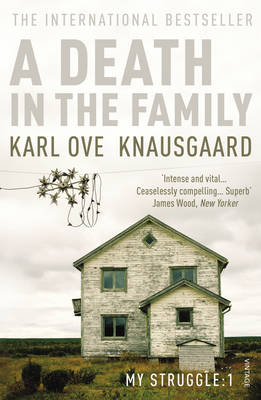 Coming to a book like this relatively late – when I’ve seen so much said about it, in so many places – makes me wonder: how will I react to it? For this surely isn’t a book to inspire indifference. If you don’t know the background, Karl Ove Knausgaard has become something of a phenomenon in his native Norway for My Struggle, a six-volume sequence of… novels? memoirs? something else? which draws on his life in immense and (on the evidence of this first volume, anyway) uncompromising detail.

A Death in the Family (the UK editions of the My Struggle books have been given individual titles) begins with a meditation on death which is one of the most affecting passages of writing that I’ve read in months. Why, Knausgaard asks, do we try to conceal the reality of death from ourselves, when we know that it’s an inevitable part of life? Slightly less than half of the book is then given over to an account of events in (mostly) the author teenage years. The second half focuses mainly on how Knausgaard reacted to his father’s sudden death.

But that is not (or not all) of the struggle that animates this book. One thing that becomes apparent very early on is that the deepest feelings Knausgaard experiences arise from art. He is quite clear on the implications of this for himself:

When I look at a beautiful painting I have tears in my eyes, but not when I look at my children. That does not mean I do not love them, because I do, with all my heart, it simply means that the meaning they produce is not sufficient to fulfil a whole life. Not mine at any rate. (p. 32)

When Knausgaard writes about art in this book, we experience something of how he feels; but we also see the difficulty he has in comprehending and expressing those feelings:

…the moment I focused my gaze on the picture again all my reasoning vanished in the surge of energy and beauty that arose in me. Yes, yes, yes, I heard. That’s where it is. That’s where I have to go. But what was it I had said yes to? Where was it I had to go? (p. 186)

Immediately after this, Knausgaard returns to more prosaic activity: microwaving a meal, washing, fetching cutlery, eating.  Earlier in A Death in the Family, he talks about yearning ‘to write something exceptional one day’ (p. 28), and feeling thwarted in that ambition by the day-to-day business of life.  And we see this manifest in the form of the book: Knausgaard will spend pages on the minutiae of events, but moments like his experience of art are rather fewer and further between. We feel the weight of all that detail bearing down on the author’s ability to express his innermost feelings.

This is not confined to Knausgaard’s encounters with art. One of the most powerful sequences in the book for me is when Karl Ove and his brother view their father’s body in a chapel, while a gardener mows the lawn outside. Knausgaard registers great detail about the body (of course), but is as aware of the noisy lawnmower as he is of his response to what he’s doing. The fact of his father’s death has no more significance in that situation than does a spot of gardening.

At the back of all this is the issue of memory. We are reminded several times that human memory is fallible; so just how are we to take all this information we are given about Knasgaard’s life – information that creates a pictures more vivid at times than our own lived experience? Perhaps we can see it as an expression of the mix of knowable and unknowable that his father’s life is to Knausgaard; Karl Ove has seen so much, but cannot know how the father he once looked up to became a man who drank himself to an early death.

A Death in the Family begins with a question about death, and ends with something of a conclusion about death. I’d like to quote that conclusion here, because it struck me so much, and because I think it sums up Knausgaard’s book so well:

…death, which I have always regarded as the greatest dimension of life, was no more than a pipe that springs a leak, a branch that cracks in the wind, a jacket that slips off a clothes hanger and falls to the floor. (p. 393)

Here, the everyday becomes interchangeable with the depths of existence; only by writing about one, it seems, could Knausgaard find a way to address the other.