One of the reasons I’ve enjoyed going to the World Literature Series of events at the London Review Bookshop is the serendipity of learning about something I don’t know that well, which then turns out to be fascinating (so far, I’ve heard talks on Japanese book design and the Thousand and One Nights). Still, it is also nice to have the reference points of a more familiar subject, which is what I had for the latest event.

The evening was hosted by the excellent And Other Stories press, as publisher Stefan Tobler interviewed Juan Pablo Villalobos, the Mexican author of Down the Rabbit Hole (which I reviewed here) and Quesadillas (which I reviewed here). We began with Villalobos reading from the opening of Quesadillas, first in Spanish (cue laughter from the Spanish-speakers in the audience and those of us who’d already read the book in English and know what the beginning is like), then English (cue laughter from everyone else). Tobler then read from another And Other Stories title, Rodrigo de Souza Leão’s All Dogs are Blue (which I reviewed here), which Villalobos has translated into Spanish from the original Portugese. Both readings underlined how much these books are spoken texts.

The interview section started with Villalobos’s experience of translating All Dogs are Blue. The author said that he viewed translation as responding to an instinct to share a book you love with other readers (he’d been introduced to the book by Tobler, and immediately wanted to translate it for a Spanish-speaking audience). Thinking about it, I suspect that I’m responding to a similar instinct when I write about books.

I’m always interested to hear about the different kinds of choices that translators have to make. For Villalobos, there was the issue of slang; he ended up producing two versions, one Spanish, one Mexican. He also made  appoint of leaving in a lot of the Brazilian words, as he wanted the reader to remember that this was a Brazilian book. Villalobos suggested that the power of All Dogs are Blue lay in its imperfections, and I think that’s very true; the rhythm, flow and idiosyncracies of its language draw you into the narrator’s world.

Turning to Villalobos’s own work, he has been widely translated himself: Down the Rabbit Hole has been translated into fifteen languages, Quesadillas into eight. Villalobos commented that he saw similarities between All Dogs are Blue and Down the Rabbit Hole in terms of their tone and humour; I think there’s something in that, and I might add to that list the importance of the protagonists’ limited perspectives.

Villalobos said that the style of Quesadillas was meant to parody the rhetoric of politicians. He also talked about it being an ‘open’ book, all loose ends and a feeling of escape, in contrast with the more ‘closed’ Down the Rabbit Hole. I can see where he’s coming from with both of those points, but now I want to re-read the books to see what else I can find. And I’d say that an author event that leaves me wanting to revisit books that I’ve previously enjoyed is a very good event indeed. (Even better if it involves a chance to meet the author and get a book signed…) 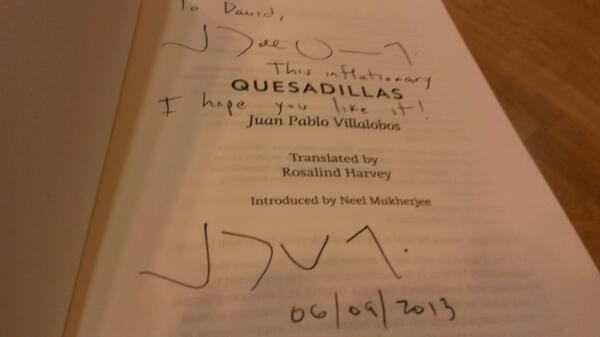 Tags: All Dogs are Blue, And Other Stories, books, Down the Rabbit Hole, events, fiction, Juan Pablo Villalobos, literature, Quesadillas