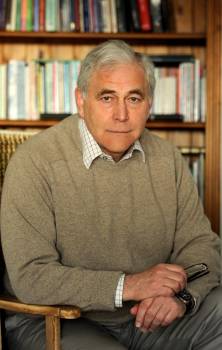 With The Testament of Jessie Lamb having won the Clarke Award last week, I thought it would be interesting to find out more about the small Highland press which published the book. So I got in touch with Sandstone’s Managing Director, Robert Davidson (pictured left, © Gary Antony), who was kind enough to answer a few questions.

DH: What’s your background, and where did the idea for Sandstone Press come from?

RD: Sandstone flowed quite naturally from the activities of my earlier life. I sometimes entertain the dangerous notion that everything up to its beginning was preparation for what was to come. For more than two decades I had lived not just a double life as engineer by day, writer by night, but triple since I was also intently involved in hillwalking, the local community, the Neil Gunn Trust, Reviews Editor at Northwords Magazine, and much else. My second book was titled Total Immersion; not for nothing. Something had to give and in 2000 I came out of my job with Site Works begun and many other projects being actioned. Soon I was Managing Editor at Northwords, where I spent three years. By that time much had been learned of what not to do and a bit more about what actually works. To extend both my own creative work and also my work with other people and projects, a new structure with new mechanisms was required and Sandstone Press was born. I think it must be obvious from outside the company that, by now, Sandstone Press is a lot bigger than any one person. There have been changes in personnel, the arrival of two great Board members in Iain Gordon and Moira Forsyth, ever rising ambitions, great support in recent years from Creative Scotland, achieving Faber Factory Plus as selling agents, many more books and increasing international recognition and outreach. My early ambitions are now refined down to project management of the whole thing. Personal projects will have to wait. I have probably written my last book, which is a sadness, but the larger project prevails. Don’t misconstrue that as a complaint. This is one of the most exciting times of my life.

DH: What do you look for in a book when you’re deciding what to publish?

RD: The strap line to our principal logo is ‘contemporary quality reading’. The list has also become refined and now focusses on outdoor (which is a natural product of our Highland location), literary and biographical non-fiction, and more general, contemporary fiction. An increasing number of titles will be bought in from abroad and it is likely that we will publish fewer, high risk, first time authors. That rather avoids your question though.

The first thing I look for is the ‘idea of the book’, and I feel it is best if it can be described in just a few words such as ‘the biography of the recently retired leader of the Cairngorm Mountain Rescue Team’ or ‘what happens to a child when his parents mysteriously disappear in Australia’. This is the seed from which all else grows. There can be too many ideas at root, I believe, and ideas which come along in the course of writing should conform to that key note.

The second thing both I and Editorial Director Moira Forsyth look for is, quite simply, good writing. Good writing can carry a book through to a disappointing conclusion and it still be deemed a success, as every reader must know. Some of their favourite books have flat or implausible endings. The word ‘quality’ looms large for us and I guess that recognising quality beyond personal leanings is one important mark of the successful publisher.

Increasingly we must seek the commercial. Personally, I love the art book. I love the quixotic and different and lyrical. To also publish such titles we must first pay the bills. We therefore seek quality and commercial attributes combined.

DH: Let’s talk about The Testament of Jessie Lamb, which I guess could be considered your breakout book. Clearly it has struck quite a chord; what was your feeling when you read it?

RD: I had no doubt about its quality as I turned the A4 sheets. I am already on record as saying it is a work of genius on several levels. Mature adult subjects treated through the eyes of a child or young adult are difficult to almost impossible to bring off and it takes an author of the highest calibre to do so. Jane Rogers achieves this with what looks like consummate ease. Its themes are contemporary and vital. It gives food for thought, indeed argument, to feminists, environmentalists, moralists of every stamp, and Christians. The work goes deep. If your heart is not aching for Jessie and her father by the end it must be made of stone. To me, all of these things were obvious. There is a part of me that wants to carry the book forward with Sandstone alone, but Canongate’s offer of partnership will work best for the title and the author. It was also too generous to refuse and I should say that I am very happy with the relationships which have developed and which are continuing to develop.

DH: What can we look forward to from Sandstone in the future? What are your ambitions for the press?

RD: My ambitions for the Press are what they always were. We are to be a self-sustaining, which is to say sustained by trade, international publishing company located in Highland Scotland, employing here and contributing to our economy. The rest is growth and  . . . Beyond that? Let me repeat what some senior Waterstones personnel said to me earlier in the year in Edinburgh. ‘Just keep publishing great books.’

DH: Finally, please recommend a book that you think deserves a wider audience (but not one that you publish).

RD: I should have been ready for this one! Still seeing myself as a writer, editor and publisher I would choose Journal of a Novel (The East of Eden Letters) by John Steinbeck for other writers, for editors, Letters from the Editor by Harold Ross, original editor of the New Yorker, and for publishers, Great Expectations by Charles Dickens, of course.

Thanks to Robert for taking the time to answer my questions. You can find out more about Sandstone Press on their website.