Behind the scenes at The TV Book Club

Last week, I and several other book bloggers (Simon from Stuck in a Book; Claire from Paperback Reader; Keith from Books and Writers; and Cherry from Cherry Mischievous) were invited to watch an episode of The TV Book Club being filmed – the episode that was broadcast tonight, in fact. This is my little account of the day.

The sofas and chairs of the TV Book Club studio are directly opposite the set of Saturday Kitchen, and it was in front of that programme’s counter that we sat to watch the filming (doing so was what really brought home to me how small the space is; though the actual set of The TV Book Club seemed relatively large from where I was sitting, there really isn’t much more outside of what you see on screen). Two episodes were being filmed that day, and we saw the second – which was actually the first in order of broadcast. So, whilst I would have loved to witness the discussion of Even the Dogs in person, I shall have to wait until next week; today was the turn of Michael Robotham’s Bleed for Me.

Filming of the programme ran more or less in ‘real time’, and the broadcast result was not much different  from what we saw in the studio (apart from the editing-out of the moment where the panel gave too much away about the murderer’s identity in Bleed for Me). Nigel Havers was an excellent guest – great to see someone so enthusiastic about books; Val McDermid’s film, in which she interviewed her forensic anthropologist friend, Sue Black, was interesting; and the discussion engaged enthusiastically with Bleed for Me.

After the filming, we were taken to the gallery to see some of the production work, and then to the green room, where a celebration was held for the birthday of one of the production team. I also had the chance to speak to presenters Jo Brand, Dave Spikey and Meera Syal. All in all, a fine and interesting day; many thanks to The TV Book Club for inviting me along. 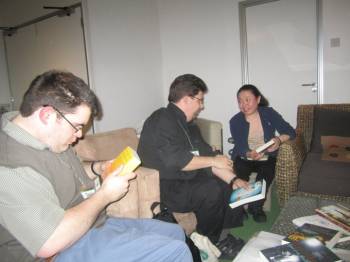 Photo courtesy of Specsavers: Our Intrepid Hero peruses Cutting for Stone by Abraham Verghese; Keith and Cherry are in the background.