TagThe Story of a New Name 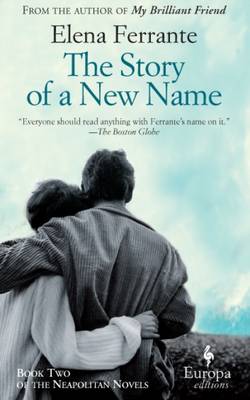 I am relatively late to reading Elena Ferrante compared to many book bloggers I know, but here (in Ann Goldstein’s translation) is the second of her ‘Neapolitan’ novels, chronicling the friendship of Elena and Lila. The Story of a New Name begins where My Brilliant Friend left off, with Lila’s wedding; and treats the two women’s late adolescence in the 1950s and ‘60s. It’s a time when the friends’ paths start to diverge more solidly than before: Elena the steady narrator, full of self-doubt, who nevertheless gets into university; and Lila, dazzling to Elena from a distance, who married into money as a way to transcend her origins, but who never quite seems to find contentment.

It’s the emotional set-pieces that draw me the most to Ferrante’s work, especially the complexities of the protagonists’ friendship. Here, for example, is Elena after she has been invited to a party by Professor Galiani (a high-school teacher whom she admires), and Lila has offered to accompany her:

This is quite a lengthy quotation, but it illustrates the density that Ferrante’s prose can reach, and the ambivalence that’s at the heart of Elena’s and Lila’s friendship. Elena doesn’t know whether to be more worried that Lila will embarrass or overshadow her; and, though so many of Elena’s thoughts on this party come back to herself, she’s also afraid that going there may end up with Lila losing what makes her brilliant.

Social and political change are in the background of The Story of a New Name, but decisively so: being exposed to new political ideas drives Elena down her career path; and a desire for betterment is behind Lila’s choices – though her position in society doesn’t make it easy. As with My Brilliant Friend, this second novel ends on something of a cliffhanger – a reminder that the story of these women’s lives will continue, and a suggestion that there are more changes to come.