I don’t come from a place you would normally expect to see featuring in fiction. A few years ago I read a novel that appeared to begin in Anytown, England; within a page or two, it became clear that this was not just my home town, but specifically my home village. I can still remember the mental adjustment this caused: going from an abstract idea of a place, I was now trying to position this story within streets I knew.

Of course, I couldn’t truly do this, because even the most familiar place in fiction – just like anything else in fiction – is ultimately a product of the words on the page. These thoughts came to mind when I was sampling Patrick Modiano’s work recently for the first time (in the form of three new translations published by MacLehose Press). All of these short novels are set in Paris – a city I’ve never visited – and often very specific in terms of their geography; but I was constantly reminded of how precarious even this can be when seen through the filter of fiction. 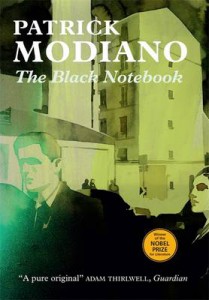 The first Modiano I read, The Black Notebook (2012; translated by Mark Polizzotti), is the account of a writer named Jean (it’s over a third of the way in before we learn his name; his identity is simply not important in comparison to his testimony and memories). He has a notebook filled with names and other random detail which bring to mind the places and people of his life forty years previously: the Unic Hôtel; an all-night café known as ‘the 66’; various members of a gang; and especially Dannie, the young woman who lived in the American Pavilion of a university even though she was neither American nor a student, and who would take Jean to stay in places where, strictly, they shouldn’t have been.

We know early on that the police questioned Jean about these people at the time; and that, twenty years later, the investigating officer gave him a copy of the case file. Something was going on beyond Jean’s knowledge, and now he is trying to retrace his steps from all those years ago. Here he is, for example, in search of a country house he visited with Dannie:

I called directory enquiries. I asked for the new number of La Barnerie, in Feuilleuse, Eure-et-Loir. And, as on the day when I spoke with the waiter in the Café Luxembourg, my voice was sepulchral. “Is that ‘Feuilleuse’ with two l’s, sir?” I hung up. What was the use? After all this time, the name Mme Dorme had surely disappeared from the directory. The house must have known a succession of occupants, who would have remodelled it so drastically that I would never have recognised it. I spread the map of the Paris region over the table, sorry to set aside the map of Sologne, which had occupied me for an entire afternoon. And I also remembered the ponds – not very far from the house – that reminded me of the region. But it doesn’t matter what the Michelin map says. For me, that house would always remain located in an imaginary enclave in Sologne. (p. 37)

The initial precision of geography gives way to an uncertainty created by the distance of years, to a recognition that the house in Jean’s mind is more important than any he could visit physically – indeed, the house in his mind is more real, because it persists where the external past does not. Eventually, Jean doesn’t care whether his recollection of the weather or the season in a particular memory is correct; perhaps the memory alone is enough.

It seems clear that Jean is not revisiting old haunts in order to reconstruct ‘what happened’ – after all, he has a file of documents to help him with that. But it also seems to me that he is not trying to bridge the gap between his knowledge and what the file tells him; he’s more or less resigned impossibility of that. Rather, Jean is doing all this – writing all this – in an effort to validate his experiences. He wants to feel that the Dannie he knew, and the times he spent with her, were real. Perhaps writing these memories down is the best chance he has for that to happen. In this way, Dannie exists only in Jean’s words, just like the Paris they shared. 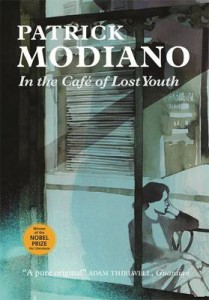 2007’s In the Café of Lost Youth (translated by Euan Cameron) is not a single account but a composite, revolving around one individual in particular: Jacqueline Delanque, nicknamed ‘Louki’. We first glimpse her as a regular at the Café Condé: the then-student addressing us can recall that there was something subtly different about Louki in comparison with everyone else, but is unable to offer anything much more concrete – it simply wasn’t the done thing at the Condé to discuss one’s background. There was one regular who kept a notebook listing customers’ names and addresses; but what, the narrator asks, can that tell you about any of them? Besides, he remembers Louki being at the Condé before she is first mentioned in the notebook; his memory, however partial, is worth more than any written list.

Our first narrator can give us only a surface impression of Louki. Our second might ostensibly be able to reach further: he is a private detective who infiltrated the circle at the Condé after being hired by Louki’s husband, Jean-Pierre Choureau, to find her. The detective is able to follow in some of Louki’s footsteps, and sketch in details of her life; but he decides not to disclose his findings to Choureau, because he respects the integrity of the life she chose to hide from her husband. As the detective puts it: “By what right do we break into people’s lives and what an impertinence to probe their hearts and minds – and to ask them for explanations – on what grounds?” (p. 63). He may as well be talking about readers here, questioning whether it’s not a little presumptive for us to expect to understand everything about a fictional character.

After the private detective, we hear from Louki herself. As you might expect, this is where we learn more detail about her background, and the ways in which she very literally tried to escape her old life. And yet:

I have lapses of memory. Or rather certain details come back to me in a jumble. For five years, I didn’t want to think about all that again. And it was enough for the taxi to go along the street for me to recognise the neon signs – Aux Noctambules, Aux Pierrots . . . I no longer remember what the place in rue de La Rochefoucauld was called. Le Rouge Cloître? Chez Dante? Le Canter? Yes, Le Canter. No customer of Le Condé would have spent time in Le Canter. There are impassable frontiers in life. And yet I had been very surprised on my first visits to Le Condé to recognise a customer I had seen at Le Canter […] (p. 84)

Here, as in The Black Notebook, we have precise geography coming up against the fallibility of memory. A simple place name is enough to trigger a recollection in Louki, but the name of the old restaurant escapes her; she thinks of it as the kind of place where no one from the Condé would go, and yet someone did… Ultimately, Louki’s testimony is as precarious as anyone else’s.

The final narrator is one of Louki’s lovers; we learn that he is a would-be writer, which may give us good cause to wonder about the exact nature of thethree preceding accounts. This narrator talks about the ‘neutral zones’ of Paris: “no-man’s-lands, where you were on the fringes of everything, in transit, or even suspended” (p. 112). This could be seen as a metaphor for Louki’s life as we come to understand it; but, really, any idea that anyone (including Louki herself) had of her emerges from such a neutral zone. She exists only in the combined, fallible recollections of the people who encountered her; and those recollections scatter once the final page is turned.

One advantage of reading several works by the same author in quick succession is that it allows you to spot similarities, connections, themes. One problem is the potential to be distracted by superficial commonalities. I could do that easily enough with Modiano: here’s another writer-character looking back, another mysterious and captivating young woman, more fuzzy memories… well, yes, but so what? All you end up with is a caricature of the author’s work. If the books resound – and Modiano’s did, for me – then it’s worth listening carefully. 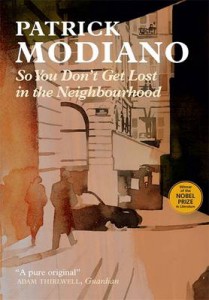 My final Modiano novel for now is So You Don’t Get Lost in the Neighbourhood (2014; translated by Euan Cameron). As the book begins, our protagonist, writer Jean Daragne, is contacted by one Gilles Ottolini, who is keen to meet so he can return an address book that he has found – but also because he wants to talk to Daragne about a particular historical matter of interest. Ottolini is accompanied at the meeting by a woman named Chantal Grippay; both of them will shortly disrupt Daragne’s solitary existence.

This novel is written in the third person, but the voice and concerns are familiar:

[Daragne] wondered whether one of the windows of his father’s office had not overlooked that side of the street. Which floor? But these memories drifted away like bubbles of soap or fragments of a dream that vanished on waking. His memory would have been livelier in the café in rue des Mathurins, opposite the theatre, where he used to wait for his mother, or in the close vicinity of the gare Saint-Lazare, an area he had known well in the past. But no. It would not have been. It was no longer the same city. (pp. 11-2)

(Now, if I were writing about So You Don’t Get Lost on its own here, this quotation would be giving a flavour of the writing, and helping to illustrate what I want to say about the novel. It can still do those things, but quoting it here, after talking about The Black Notebook and In the Café of Lost Youth, also starts to feel a little like labouring a point. It shouldn’t, because the point is so central to Modiano’s work; which is why I want to try to maintain a sense of each individual novel.)

As with Jean in The Black Notebook, Daragne finds old memories being sparked as he reads documents and travels the city. The difference is that, where Jean’s act of remembering is an attempt to affirm his experiences, Daragne’s is more a recovery of experiences. Ottolini and Grippay are gradually displaced in the text as Daragne relives long-buried memories. For better or worse, the Paris he knew looms larger than the one he now lives in.

Thinking about these three novels together, I am struck by the subtly different ways in whcih they encroach upon the same imaginative space. In The Black Notebook, Jean seeks to hold on to the past he knew in the face of the police file’s ‘official’ past. In the Café of Lost Youth presents Louki as a person whose totality is beyond the grasp of any single individual, not least herself. In So You Don’t Get Lost in the Neighbourhood, Daragne conjures raw fragments of memory from the prompts of unknowing others. In all three books, the past is a jigsaw to be pieced together, if you can trust the pieces; and the city changes with every new (or old) experience.

So You Don’t Get Lost in the Neighbourhood (2014) by Patrick Modiano, tr. Euan Cameron (2015), MacLehose Press hardback