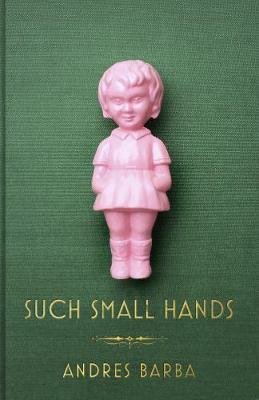 When I talk about my new-found love of short, sharp novels, I’m talking about books like Signs Preceding the End of the World and Mildew and The Boy Who Stole Attila’s Horse and Fever Dream (those are just some of the Spanish-language ones) – books that are dense enough to blossom into their own reality, and short enough that they reach a peak of intensity.

Now here’s another one. Andrés Barba is a Spanish writer who was named among Granta’s Best Young Spanish-language Novelists back in 2010. Such Small Hands is not his first novel to be translated into English (a number of others have been published by Madrid-based Hispabooks), but it is his first from a UK-based publisher (namely, Portobello Books). It is a novel of childhood, secrets and identity – and it’s very creepy indeed (the cover image above captures perfectly the mood of the book).  But it begins with the building-blocks: words.

Marina is seven when she’s in a car crash with her parents. Her memories of the event are abstract: sounds, speed, a sensation of thirst. She has learned to say, “My father died instantly, my mother is in the hospital, but not necessarily with a real understanding of what those words mean:

Lips pronounce them without stopping. Quick, dry words. They come in thousands of different, unpredictable ways, sometimes unbidden. Suddenly they just fall, as if onto a field. Marina’s learned to say them without sadness, like a name recited for strangers, like my name is Marina and I’m seven years old.
(translation by Lisa Dillman)

Marina has not yet formed for herself the language to describe what happened to her, so she ends up learning phrases by rote. There’s a gap between what she says, what she understands, and what she has experienced. It doesn’t stop there: Marina is told she will be sent to an orphanage, but has no way to conceive of what this might be. In the face of everything, Marina turns to the doll given to her by her psychologist. She gives the doll her own name, invests it with personality; it’s just about the only thing that feels real to Marina at this time.

When Marina has arrived at the orphanage, Barba’s narration switches to a disconcerting chorus, representing all the other girls. Until now, they have viewed themselves as being all the same – part of the same whole, even. Seeing Marina’s scar from her injuries introduces a difference, and sets off a cascade of realisation among the girls:

We became aware of each other and we felt naked before that body that wasn’t like our bodies. For the first time we felt fat, or ugly; we realized that we had bodies and that those bodies could not be changed. Just as she had materialized, we had materialized: these hands, these legs. Now we knew that we were inescapably the way we were. It was a discovery you could do nothing with, a discovery that served no purpose. We huddled together when she approached. We were afraid to touch her.

Following this, the chapters’ viewpoint alternates between Marina and the girls, each adding (or perhaps peeling back) another layer of the complex game of growing up together. The other girls are by turns fascinated and repelled by Marina, and they treat her accordingly. Marina herself realises that she is different, and tries in various ways to take ownership of that. Underlying these events is the ever-shifting logic of childhood, something captured in the fluid nature of Lisa Dillman’s translation. There’s an extraordinary sequence which weaves together an interview between Marina and the orphanage psychologist about the car accident, and an instance where Marina uses a stick to skewer a caterpillar in the playground, as the other girls gather around. This passage dissolves the boundaries of time and reality: disorienting for the reader, perfectly intuitive to Marina.

One night, Marina proposes a game to the other girls: they will take turns to dress up as a doll, in clothes and make-up that Marina has obtained; the doll will then remain quiet while the girls play with her. The girls’ chorus describes what this is like:

You are passed from one set of hands to the next, from one bed to the next. You’re never alone again. Safe inside the doll, you love harder, feel deeper, exist boundlessly, no moderation. And yet you disregard the sound of girls kissing your cheek. Nothing matters now.

The doll game allows each girl to experience individuality to a greater degree than she has before – albeit paradoxically by suppressing any thoughts or personality she might have of her own. It’s a deeply private experience that can only be articulated generically, and in that sense perhaps analogous to Maria’s experience of the car crash.

Marina herself cannot understand why the girls continue to bully her during the day when they’ll happily submit to her game at night. It’s another example of that fluid logic underpinning events… but let’s leave that there. The experience of reading Such Small Hands becomes increasingly claustrophobic as the book’s pieces fall into place. This is a novel that will continue to haunt me for some time; and, of course, I’ll be reading more of Barba’s work in the future.

The UK edition of Such Small Hands is published on 3 August. The US edition, published by Transit Books, is already available.